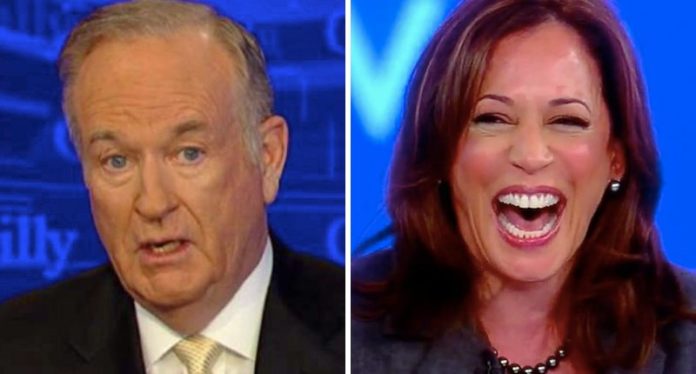 Disgraced former Fox News host Bill O’Reilly thought he’d crawl out of whatever hole resides in so he could weigh on the announcement made Monday by Senator Kamala Harris (D-CA) that she will seek the 2020 Democratic nomination.

O’Reilly, who as fired from Fox for allegedly being a serial sexual harasser, posted this message on Twitter regarding Senator Harris:

Full steam ahead on 2020 – Kamala Harris announced she will run today. She denied Brett Kavanaugh due process in front of the nation, and in so doing has lost my vote. I could not imagine any American for somebody who does not believe in due process. pic.twitter.com/9NzPikOzM7

Of course, it’s no surprise that O’Reilly would be on the side of Brett Kavanaugh, who was accused of sexually assaulting a woman in college. O’Reilly always sides with men who have been accused of such behavior, including the late Fox News chairman Roger Ailes and President Donald Trump, but he probably wasn’t expecting to be completely owned by the Harris campaign, which fired off the response to O’Reilly:

Somehow, we will soldier on pic.twitter.com/1P1hyMizBf

And social media also lit up O’Reilly, reminding him of his own disgusting behavior:

In other news, pinhead fired from Fox News for sexually harassing women for years and buying their silence for tens of millions of dollars announces he will not vote for woman Democrat running for president.

Because before the Kavanaugh thing you would have been 100% on board with her. Righhhhhht.

Lmaooooo – as if you were EVER going to vote for Kamala Harris.

Get back under your rock, perv.

Bill, we can’t imagine how a sexual predator who paid out $32M to his victim still feels his opinions are relevant but here we are.

Due process. Billo when does someone need due process for a job interview

Poor Bill! He misses the days when white men could get away with just about anything as long as they denied they did anything wrong. Now he just wishes he was the least bit relevant.