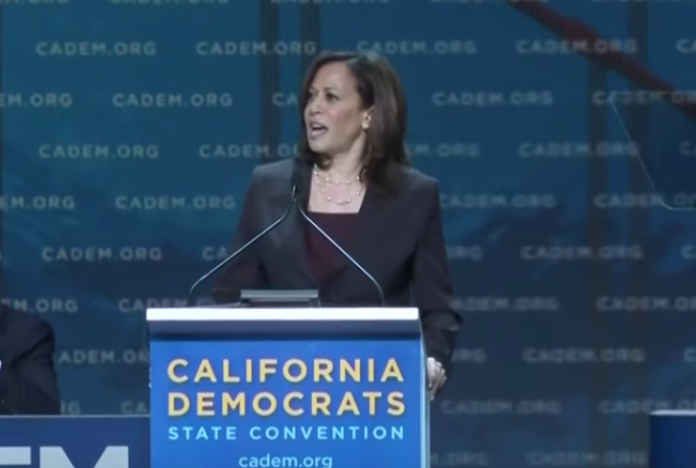 She is currently polling in third or fourth place among the more than two dozen Democrats running in the primary to win the Democratic nomination in 2020. But Harris is likely going to qualify for the debates, and if her speech at the convention is any indication, she will be a formidable challenger for Democrats and to Trump if she prevails in the primary.

As we all know, House Democrats are currently investigating Trump, subpoenaing his financial records and tax documents as well as the full unredacted Mueller report that would shine further light on his obstruction of justice crimes listed in the report. Trump is currently flouting congressional oversight and lying through his teeth as Attorney General Bill Barr helps him hide what he does not want Democrats or the American people to see.

Harris told the crowd that Trump has lied over 10,000 times since taking office.

“That’s not leadership,” she said.

Then she nailed Trump for betraying working people by giving corporations and the wealthy trillions of dollars of tax cuts while sticking the rest of us with the bill.

Harris pointed out that Trump also promised healthcare for the American people, but has spent his time trying to take it away.

Leaving no stone unturned, Harris took aim at Trump’s trade wars and tariffs, which she dubbed “Trump’s trade tax” and informed the crowd that his tariffs have cost American workers billions so far.

In the end, she went after Trump for obstructing justice and denying that Russia meddled with the 2016 Election and blasted Trump and Barr for being engaged in a cover-up.

“He denies that Russia interfered in the election of the President of the United States,” she said. “He obstructed justice and then hired an attorney general to clean up the crime scene.”

“We need to begin impeachment proceedings and we need a new commander-in-chief,” she concluded to thunderous applause. “We’ve seen how this president has lied to divide. It’s a pathological failure of leadership.”

Harris just used her experience as a prosecutor to lay out a strong case against Trump in 2020, and if she is propelled to the nomination she will get a chance to treat him like a hostile witness on the stand in front of voters who are eager to render a guilty verdict and send him packing so federal prosecutors can charge him for his crimes.

Harris may not top the polls at the moment, but her campaign is gaining steam. If she keeps delivering speeches like this, she’ll be tough to beat.