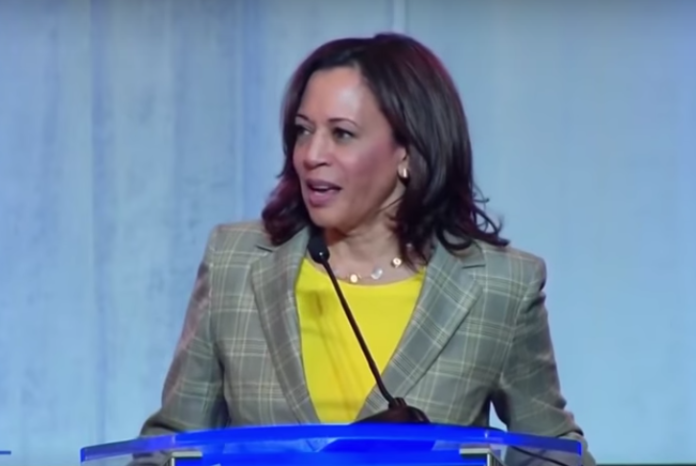 Senator Kamala Harris (D-Calif.) descended upon South Carolina with her fellow 2020 primary candidates on Saturday and delivered a barn-burner speech at the Democratic Convention that should have President Donald Trump and the GOP shaking in sheer panic.

Trump’s poll numbers for 2020 across several swing states is in the toilet as his own internal polls show him losing.

And as the call for impeachment and prosecution grows louder, Harris put her prosecuting attorney background on full display as she indicted Trump on the stage and delivered a good argument for why she deserves to be the Democratic nominee.

She began by explaining what Trump means when he claims to want to “make America great again.”

“And I’m going to tell you, not only am I child of parents who were active in civil rights, fighters and marchers, I also had a career as a prosecutor,” Harris continued. “So let me tell you a little bit about that. I know how to take on predators. I took on the big banks and won over $20 billion. I took on for-profit colleges and put them out of business. I took on oil companies who were polluting our environments. I took on transnational criminal organizations who were preying on women and children. I know how to get that job done. And I did it for the people. For the people.”

She then gave everyone a description of Trump’s “rap sheet.”

“So let me tell you, we need somebody on our stage, when it comes time for that general election, who knows how to recognize a rap sheet when they see it and prosecute the case,” Harris said. “So let’s read that rap sheet, shall we?”

“He asked black Americans, he said, what do you have to lose? Well, we know civil rights investigations are down, hate crimes are up, we had a lot to lose. Let’s look at that rap sheet, where he told working people that he would help them but instead passed a tax bill benefiting the top 1 percent and the biggest corporations of this country. Said he would help the farmers, but passed what I call the Trump trade tax, Trump trade policy by tweet, and now we’ve got farmers who have soybeans rotting in bins and autoworkers who may be out of their job by the end of the year. Let’s look at that rap sheet, where he said he would give everyone healthcare but he’s still trying to rip healthcare away from folks and turn back the clock on Obamacare. Let’s talk about looking at that rap sheet, where he has embraced dictators like Kim Jong-Un and Putin and taken their word over the word of the American intelligence community.”

“Let’s prosecute the case!” she concluded as the crowd cheered.

Here’s the video of Harris’ full speech via YouTube:

Most of the Democratic candidates are not playing around. They are going right for Trump’s jugular and it sounds like Harris is the most serious about prosecuting him to the fullest extent of the law. Trump should worry about former Vice-President Joe Biden, but he should fear Harris. She would be his worst nightmare.