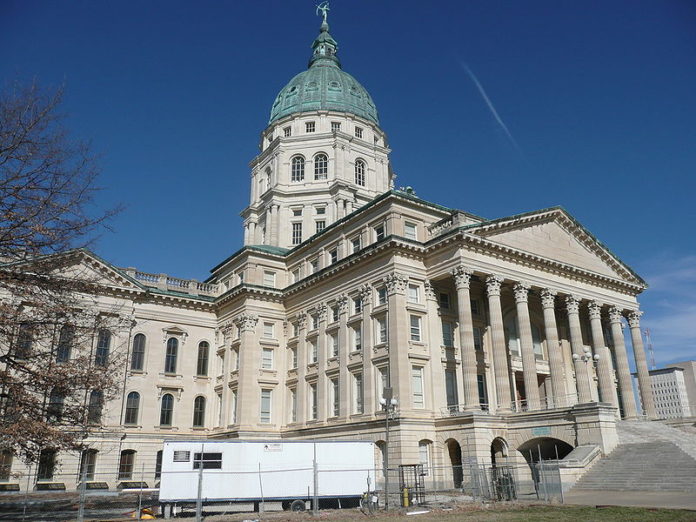 Kansas repealed former Governor Sam Brownback’s disastrous tax cuts that tanked the state’s economy in 2017 over his objection. Now the state has a budget surplus and a strengthening economy again.

Brownback pushed the tax cuts through the Republican-dominated state legislature back in 2012 claiming that it would boost the economy and bring business into the state. Instead, state revenues took a nose dive as extreme trickle-down economics took hold and wreaked havoc on the state’s credit rating.

In fact, the state ended up becoming hundreds of millions of dollars in debt as education suffered.

One year ago Kansas was still nursing a hangover from a disastrous tax-cutting experiment by former Republican Gov. Sam Brownback, who slashed individual income-tax rates and eliminated taxes on “pass-through” income from certain businesses. Even though a bipartisan super-majority of the state legislature had repealed the Brownback program over his veto in 2017, the state was still dealing with a residual $351 million revenue shortfall for fiscal 2018, according to the Center on Budget and Policy Priorities. In addition to its No. 35 overall ranking last year, Kansas finished a dismal No. 45 in the Economy category.

Fast-forward to 2019 and the repeal has saved Kansas from financial ruin, proving that extreme conservative tax-cutting measures don’t work and are not the definition of fiscal responsibility.

“We are returning to our roots as a very progressive, thoughtful, forward-looking state,” Democratic Governor Laura Kelly said. “Kansas for years now has been at the low end of all economic metrics. That’s changing.”

Indeed, CNBC reports that the state rose 16 points in economic rankings, the most improved state from 2018 to 2019.

But Republican lawmakers seem bound and determined to reinstate the tax cuts that hurt the state in the first place, arguing that the tax cuts worked and that the only reason for the deficit is because spending wasn’t cut enough. Seriously.

Kansas voters really need to learn which Republicans are still pushing this bullsh*t economic theory and remove them from office permanently to prevent their state from repeating the same mistake that screwed them over.

Kelly says her team is looking into how to balance all the taxes so that revenues remain stable.

“We will be studying our entire tax structure, because it’s way out of whack right now,” she said. “We want to take us back to what works for Kansas, which is really essentially what we call the three-legged stool: Balance out our property taxes, our sales tax, and our income taxes.”

Cutting spending could be a part of the solution, but the way Republicans are talking they think it’s the sole solution. Restoring the tax cuts is a ridiculous idea. When an idea fails in such an embarrassing way, that doesn’t mean you try it again and hope for a different outcome. Every state needs tax revenues to pay for things like roads and education. Cutting spending on these things would hurt the state just as much as the tax cuts did and on a very personal level as people would literally see the negative impact of deep spending cuts on their daily lives.

It’s time for Republicans to face the fact that trickle-down economics does not work and toss it into the trash bin. In just a year, repealing these tax cuts restored Kansas to a more tenable economic situation. Just imagine how good it will be once a more progressive tax system is put back into place.