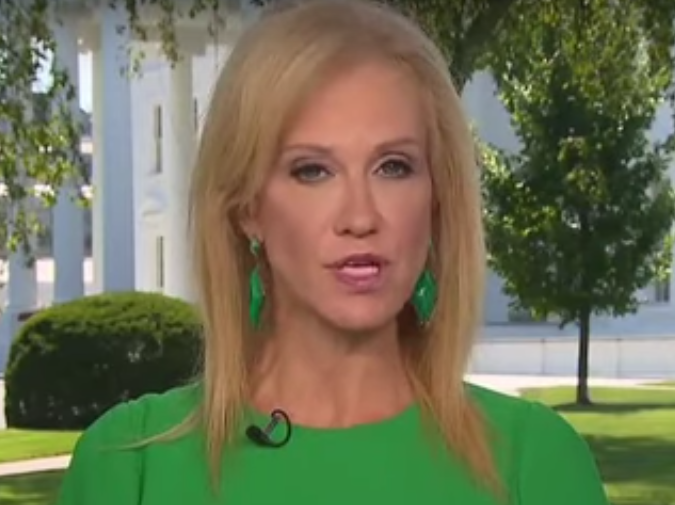 Kellyanne Conway jumped to President Donald Trump’s defense again on Monday morning during an interview on Fox News and snapped after being asked about The Squad.

The Squad is made up of Reps. Alexandria Ocasio-Cortez (D-N.Y.), Ayanna Pressley (D-Mass.), Ilhan Omar (D-Minn.) and Rashida Tlaib (D-Mich.), a group of Democratic women of color who have been giving Trump fits since they took office in January.

In fact, they bother Trump so much that he has been launching racist attacks against them for over a week now, with his latest tantrum coming on Monday morning when he had the audacity to claim that they are the real racists.

The “Squad” is a very Racist group of troublemakers who are young, inexperienced, and not very smart. They are pulling the once great Democrat Party far left, and were against humanitarian aid at the Border…And are now against ICE and Homeland Security. So bad for our Country!

The lawmakers voted against the aid package because there was nothing in the bill preventing Trump from using the money to continue treating migrants inhumanely. Instead, Trump only gave House Speaker Nancy Pelosi (D-Calif.) his word and she foolishly believed him and let the package sail through the House.

But Kellyanne Conway also lashed out at the women during an interview on Fox News after being asked about them, whining about their refusal to support Trump’s racist anti-immigrant agenda that looks more and more like Nazism every day.

And then she complained that the media isn’t fact-checking what the women say, taking aim at Omar specifically.

“Last week’s press conference Omar said — let me quote her, nobody fact checks these people,” she began. “‘President Trump is pursuing an agenda to allow millions of Americans to die from a lack of healthcare.’ What is she talking about? Not a single person called her out.”

The reason why no one is calling her out is that she’s not wrong. Trump’s effort to kill the Affordable Care Act through the courts would put millions of Americans at risk of dying because they would no longer have access to insurance to cover their medical expenses. This is particularly true for people who have what insurance companies classify as pre-existing conditions.

In fact, a recent study found that Obamacare has significantly improved outcomes for cancer patients. That means getting rid of Obamacare would cause cancer outcomes to worsen, resulting in deaths.

So, yes, Omar is right when she says Trump’s agenda would allow millions of Americans to die from lack of healthcare, and rather than fact-check Kellyanne, Fox News just let her say it unchallenged.