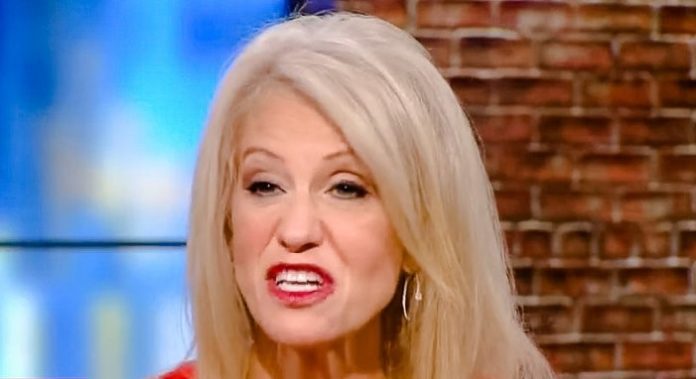 Kellyanne Conway leveled a hypocritical accusation against Democratic voters on Saturday during an appearance at a GOP dinner in Ohio, referring to them as “racist and sexist”.

Despite being invited to speak at the dinner because of her job as counselor to President Donald Trump, Conway insisted that she was not in violation of the Hatch Act again because she “was speaking in her personal rather than professional capacity.”

That insistence alone should trigger yet another investigation by the Government Ethics Office.

And the reason why is because Conway attacked Democratic candidates during her remarks, specifically whining because the top three candidates in the Democratic 2020 primary field are all white and older.

She even went so far as to accuse Democratic voters of being “racist and sexist.”

“Their top three candidates are white, career politicians in their 60s and 70s, which I have nothing against except they (Democrats) certainly do,” Conway told the audience according to the Cincinnati Enquirer. “I don’t know why the heck the Democratic party electorate is so racist and sexist. I can’t figure it out.”

The problem is that Senator Elizabeth Warren (D-Mass.) is a woman who is currently leading former Vice-President Joe Biden and Senator Bernie Sanders (D-Vt.) in a recent Iowa caucuses poll.

Furthermore, Warren is not a career politician. She had a long career in higher education as a Harvard professor prior to getting involved with government, only getting elected to her first public office in 2012. She took office in 2013 as a United States Senator.

It should also be noted that Democrats chose former President Barack Obama as their party’s nominee in 2008 and 2012, and chose former Secretary of State Hillary Clinton as their nominee in 2016. Obama went on to become the first African-American president while Clinton became the first female presidential nominee. Democratic voters certainly are NOT racist or sexist.

Meanwhile, Republicans chose Trump, a 73-year-old white man to be their nominee and have never chosen a person of color or a woman to be their party’s presidential nominee.

Either Conway didn’t recognize the irony of her accusations or she just didn’t care because she’s a liar like Trump.

Ohio Democratic Party Chairman David Pepper slammed Kellyanne and noted that her and Trump must be terrified of losing in Ohio if they are launching such attacks.

“With a broad field of diverse candidates, our primary process has shown the strength of our party,” Pepper said. “It is clear that Kellyanne and the president are worried about Ohio since they’re here every other week.”

Indeed, and they should be worried since Trump is underwater there and is losing to Biden in a hypothetical general election match-up.

This desperate attack on Democrats only serves to energize Democratic voters, who should come out in force in 2020 to make sure Trump and Conway are banished from the White House.