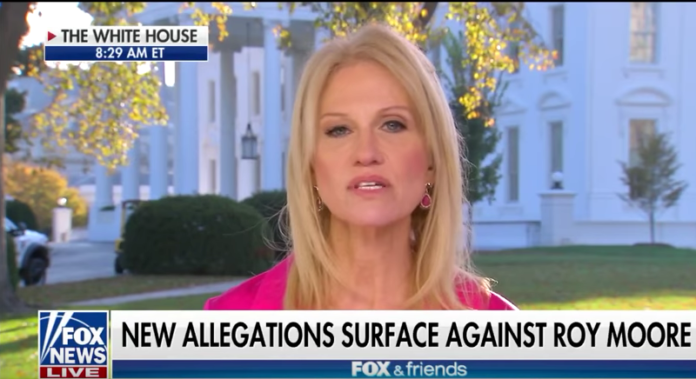 Kellyanne Conway had a meltdown on Fox & Friends after the hosts pushed to get Donald Trump’s response to Roy Moore.

More women have come forward to accuse Alabama GOP Senate candidate Roy Moore of sexual harassment and assault, and not even Fox News can ignore the situation.

On Wednesday, CNN reported that Donald Trump would wait and see what Sean Hannity decides about Moore before making his own decision. Well, Hannity chose to punt, saying that the matter should be left to the voters to decide. And Trump has remained silent.

During her appearance on Fox & Friends on Thursday morning, Conway was asked about what Trump thinks about Moore and the allegations against him.

“He’s been very busy here working,” Conway said before claiming that she was the “first” White House staffer to support the victims. She even tried to avoid answering the question by trying to blame Congress for not taking action and made it about herself.

“I tried to make this an issue over a year ago on October 9, 2016, when I talked about, maybe when I was younger and prettier, folks on Capitol Hill behaving in such a way that we should take a look at it. Nobody wanted to listen to me because of the campaign I was managing.”

Conway then declared that she “will not get ahead of this president and anything he wishes to add.”

Steve Doocy pointed out that Trump has talked to Mitch McConnell on the phone recently and wanted to know if they spoke about Moore since McConnell has called for Moore to drop out of the race.

“The president will make a statement when he wants to make a statement. And none of us should get ahead of that,” Conway said. “I do find that the mainstream media want to talk about this issue more than almost anything else. And again, we’re not telling Americans what’s in the tax plan for them. If this is just going to be a war of soundbites, then the tax plan will not be as successful. I’m sorry, I think it’s incumbent upon everyone who has a role and a responsibility to inform people what’s going on on Capitol Hill to tell them what’s in this plan.”

In other words, Donald Trump is a coward, and he doesn’t want to do anything to hurt a fellow sexual predator. Got it.