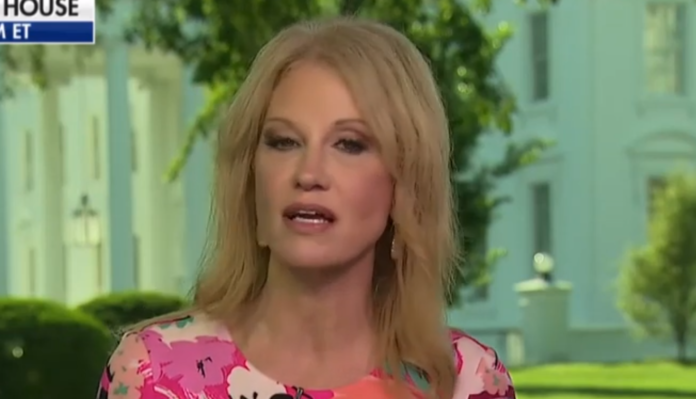 According to White House counselor Kellyanne Conway — aka the queen of “alternative facts”) — the report from Special Counsel Robert Mueller proves that Russia didn’t interfere with or attack the 2016 presidential election, so that takes care of any claims that President Donald Trump is an illegitimate head of state.

During an interview with the always gullible hosts of “Fox & Friends,” Conway was initially asked if her boss would “go out of his way” to keep Mueller from testifying before Congress. She responded:

“Bob Mueller’s report is definitive and conclusive, and as Mitch McConnell is going to say our Majority Leader in the Senate today, case closed that Putin and the Russians see us still arguing about Russian interference in election that did not exist, sure the interference existed, right, but read the whole Mueller report, read volume one.”

What planet has Kellyanne Conway been living on? What cave devoid of information has she been hiding in? The Mueller report specifically said that Russia did indeed attack the 2016 election in an attempt to benefit Donald Trump. That’s an undisputed fact.

Also be sure to note that Conway urged viewers to read the first volume of the Mueller report and not the second, which clearly details multiple instances of Trump obstructing justice in an attempt to shut down the Russia probe.

The White House is getting rattled because they know the minute Mueller testifies before the House Judiciary Committee, their carefully crafted cover story will be blown apart.

As the late Senator Daniel Patrick Moynihan once remarked:

“Everyone is entitled entitled to your own opinion, but not to his own facts.”

The facts are not only Donald Trump’s side, and that will become abundantly clear the minute Robert Mueller begins his testimony.