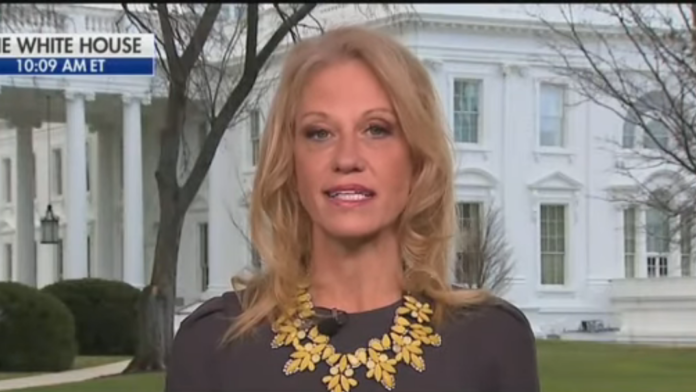 Kellyanne Conway — aka the Queen of “Alternative Facts” is at it again, and she wants us all to know that despite what the polls show, the majority of Americans do indeed want to spend billions of dollars on a border wall.

During an appearance on Fox News Wednesday, Conway insisted that President Donald Trump’s Oval Office speech on Tuesday evening had convinced people that a wall on the Southern border is absolutely necessary.

However, in the next breath, Conway warned that no one should believe any polling data which may be coming out in the days ahead suggesting that Americans remain opposed to the wall:

And then the counselor to the president went off on a bizarre rant, accusing Democrats of not being willing to talk about crime that comes across the border:

The facts, however, suggest otherwise when it comes to the issue of drugs, the vast majority of which are brought in other ways, such as via waterways and other points of entry. A wall or fence won’t change that.

As for the crime hysteria this White House is attempting to stir up in order to justify pouring billions of taxpayer dollars down a rathole, studies have repeatedly shown that immigrants commit crime at a much lower rate than native-born Americans.

Oh, and as for those poll numbers that Ms. Conway wants to deride as “phony,” those also don’t look very promising for this administration. A poll conducted by NPR, PBS News Hour and, Marist in late December showed that 69 percent of Americans don’t think the wall is a priority.

“The public is not any more supportive of building a wall along the U.S.-Mexico border. Thirty-one percent of the public favor the construction of a wall while 63% are opposed. Public views have not changed significantly over the past six months. In 2017, roughly one-third (36%) of Americans expressed support for the construction of a wall along the country’s southern border.”

So while Kellyanne and her boss want us to believe that people are clamoring for a wall, the numbers simply don’t support that assertion. And the only thing “phony” is the false logic being used to hold the country hostage in order to satisfy the whims of a senile old man in the Oval Office.