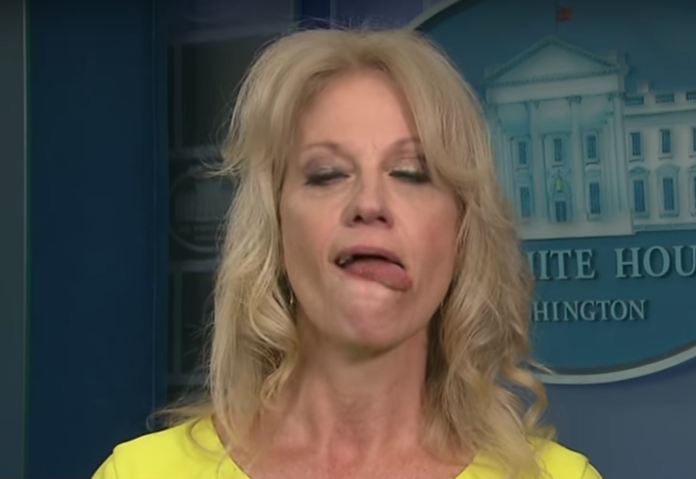 Fox News (aka Trump TV) is little more than the propaganda wing of the White House and Republican Party. While they pretend to be a legitimate cable news outlet, their lack of real journalistic standards and willingness to parrot whatever talking point the Trump administration is using for the day undercuts their claim of being “fair and balanced.”

But there is one thing Fox does well: Suckering older white Americans to watch their BS and believe whatever tripe they’re being fed. So it should come as no surprise that the right-wing media outlet does so well in the ratings.

In October, Fox again beat out their rivals at CNN and MSNBC, so White House counselor Kellyanne Conway thought she’d go on Twitter and give Trump’s favorite network a nice pat on the back, posting this:

Be sure and note that hashtag Conway used: #FactsFirst. How’s that for enough irony to choke a mule? Since when has Fox ever been interested in facts? Tucker Carlson, Sean Hannity, and Laura Ingraham traffic in conspiracy theories, half-truths, and outright lies each and every night on the Fox airwaves. Facts first? That’s a good one, Kellyanne!

It didn’t take long for the social media pushback to kick into high gear in response to Conway’s tweet. Take a look:

Except when it involves you and the White House, in which case it is #AlternativeFactsFirst

Popularity does not equal credibility.

I think you mean #alternativefactsfirst.

I think you mean #alternativefactsfirst.

Jerry Springer ratings are right up there as well..

EVERYONE LOVES A GOOD GONG SHOW

Everyone loves looking at a train wreck.

Poor Kellyanne. She’s so self-deluded she probably considers Trump to be a moral leader.