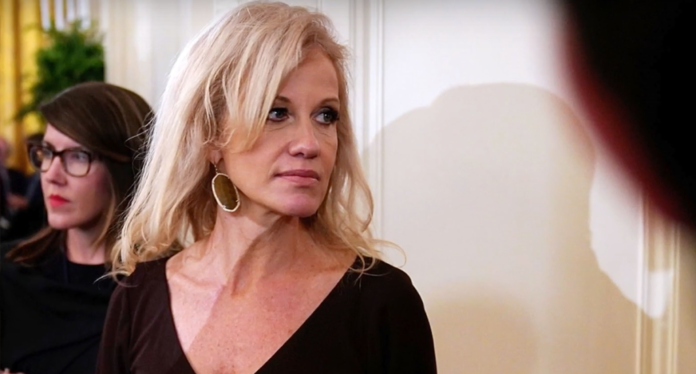 She may have no formal experience in drug policy, law enforcement, or public health, but in keeping with other Trump appointments, Kellyanne Conway is the perfect choice for leading the fight in the opioid crisis. She is tasked with helping to turn around “the deadliest drug crisis in American history,” as Attorney General Jeff Sessions put it.

Sessions announced that Conway would step in to turn the tide on the drug epidemic that killed 64,000 Americans last year. According to his “stunning” estimate, one American dies every nine minutes from the overdose epidemic.

Sessions said at a press conference:

“I want to thank Kellyanne Conway for being here today. The President has made this a White House priority. He’s asked her to coordinate and lead the effort from the White House,” he continued. “She is exceedingly talented. She understands messaging, and that we ought to change the perception in this country, and try to reduce, through prevention, addiction in that regard.”

Conway has made statements on the crisis before, which might reveal what her future messaging may sound like, though the White House has yet to release a strategy plan:

“The best way to stop people from dying from overdoses and drug abuse is by not starting in the first place.”

Sounds like a probable reboot of the “Just Say No” campaign introduced by Nancy Reagan in 1982.

Clint Watts, from the Foreign Policy Research Institute, had this to say:

Will the kick off be at the site of the Bowling Green massacre? @KellyannePolls involvement makes me skeptical there is any effort on the opioid crisis https://t.co/cAciAgggVr

Sessions also announced the establishment of the first new field division of the US Drug Enforcement Administration in 20 years. The division will be located in Louisville, Kentucky and will combat the opioid crisis in Tennessee, and West Virginia, states under particular threat. Sessions also said he called on all U.S. attorney’s offices to designate an opioid coordinator “to serve as a kind of quarterback.”

Meanwhile, reports on Wednesday said Conway might have violated federal law, the Hatch Act. On the same day, she was promoted to a position of historical importance. Now it appears she’s officially under investigation by the U.S. Office of Special Counsel, unrelated to Bob Mueller.

Walter Schaub, former Director of the United States Office of Government Ethics, indicates the case against Conway may be serious:

New: We’ve filed an amended complaint with the Office of Special Counsel that adds new information to what was already a slam dunk Hatch Act complaint against Kellyanne Conway. Check it out on @CampaignLegal’s website. https://t.co/mjRl5mlyCE

The opioid crisis is killing people. Lots of people. All kinds of people. The crisis comes as a result of a lot of intertwining factors, and will not be easily ended or “solved.” And you can’t heave Kellyanne Conway at it and consider the problem fixed.

See more in the video from Newsy below: