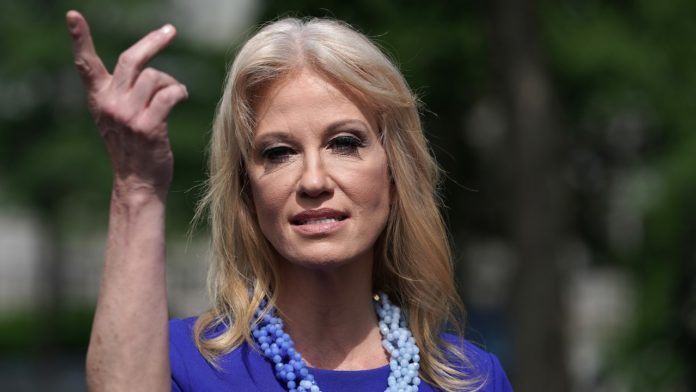 According to White House adviser Kellyanne Conway, Senator Elizabeth Warren (D-MA) is to blame for the mass shooting in Dayton, Ohio, that left nine people dead.

“Everybody needs to stop preening in front of the cameras. Stop raising money — Elizabeth Warren, I’m talking to you — for Senate candidates off of this, and stand up and work with us.”

Kellyanne Conway is “hopping mad” that nobody is discussing the Dayton shooter’s apparent support for Elizabeth Warren, and attacks her for “raising money [by] talking about the mass shooting.” pic.twitter.com/6Al2pYWyzS

But Conway got hit with a massive dose of karma when Sam Stein of the Daily Beast followed-up on the tweet with one of his own:

Not bothered. confused. It suggests that you believe his motive was political. Do you? If so, what information do you have to support that.

And while I have you. I can’t seem to find the instance of you sharing a story about the El Paso gunman’s motivations. Can you explain why?

And then others reminded Conway that the real purpose of her tossing out a red herring that blames others is just an attempt to divert attention from the fact that the El Paso mass shooter quoted her boss almost word for word in his online manifesto:

The El Paso white supremacy terrorist was definitely inspired by Kellyanne’s boss and his xenophobic rhetoric, yet Kellyanne still happily works for him.

This is a piss poor attempt at whataboutism.#TrumpIsAStochasticTerrorist

The biggest lie republicans ever told is in saying that 2 wrongs make a right when 90% of the time their side is proven wrong, proven lying, proven discriminatory and racist. Yet when proof comes for you it is denial, blame, and unwarranted finger pointing.

Listen carefully: In case you are not bright enough to discern the difference, no one on the left in public office is standing up and inciting violence, or describing immigrants as an invasion. Your overlord is CLEARLY in a class of inciting that is unique and very troublesome.

So what !! He was already had a history of threatening “classmates” in high school. He is a perfect example of someone who never should be allowed to buy an assault weapon. He cost lives due to Republicans incompetence.

Nice try, Kellyanne, but no one is buying your BS.