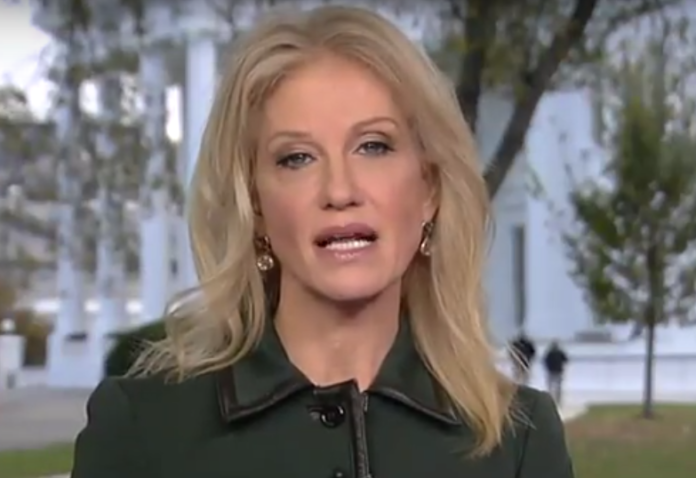 During his Wednesday press conference, Trump lashed out at Acosta for daring to ask him a question about his fear mongering remarks about the migrants walking to the United States southern border from Central America.

When Trump tried to ignore Acosta’s second question, a White House aide tried to snatch the microphone from him, but Acosta stood his ground.

Later on, White House Press Secretary Sarah Huckabee Sanders would announce that Acosta had lost his press pass and is now banned from White House grounds, excusing the decision by accusing the longtime journalist of inappropriately touching the female aide even though video proves he never put his hands on her.

Despite this fact, Conway continued to push the false accusation leveled against Acosta during an interview on Fox News.

“She was just doing her job, which was to reclaim the microphone that belongs to the federal government, and hand it to the next reporter,” Conway said. “Obviously, I don’t think anybody should have — any young woman, particularly — should have swiping away at them, grabbing the microphone back. That’s very unfortunate. I have talked to that young woman, she is very brave and just doing her job.”

Again, the video shows Acosta not laying a hand on the aide, and even he said “Pardon me, ma’am” as he refused to let her take the microphone away from him.

Host Bill Hemmer questioned the appropriateness of revoking Acosta’s press credential, but Conway resorted to attacking the free press and claimed that unnamed reporters have been complaining about supposed “grandstanding” by journalists who are allegedly out to “get the President.”

“Look, there are journalists here at the White House who every single day try to do their job by getting the story, others try to get the president,” she said. “They shall remain nameless right now, and I think that some people like to grandstand and be part of the story. There is no question about that. We hear that from other journalists. Maybe they will not come forward and say that, but they say that. They think that some people, not to name names, but make everybody look a little less authoritative and less biased.”

Journalists like Acosta are simply doing their jobs by asking Trump questions. Just because Trump does not like the question, doesn’t mean it’s an attack on him.

Kellyanne Conway and the White House are slandering Acosta to excuse their assault on the free press and it’s something that journalists across the nation should no longer tolerate. Because if this can happen to Acosta, it can happen to any of the other journalists in the press corps.