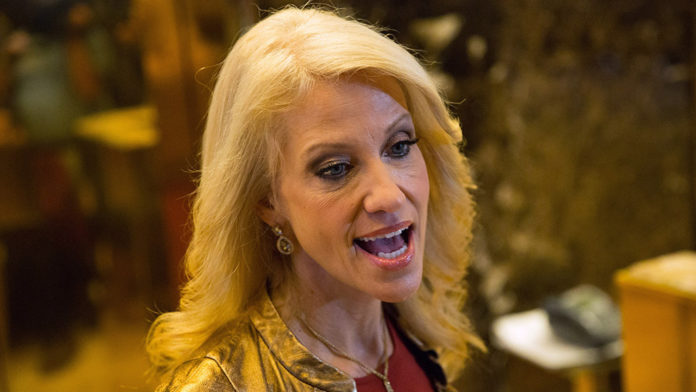 On Tuesday, the Justice Department announced that several people had been charged for being part of a bribery scheme to get their children admitted to top U.S. colleges such as Yale, USC, and Georgetown as part of the largest college admissions scandal in history.

Among those arrested were actors Felicity Huffman and Lori Loughlin. Huffman was taken into custody at her California home.

While the admissions scandal is a clear case of how privilege and money is used to buy favors, it’s also a tragic reminder that many young students are denied entry into top universities because they cannot afford to compete with their wealthy counterparts.

White House counselor Kellyanne Conway decided she’d join the debate, so she went on Twitter and posted this remark:

They worried their daughters are as stupid as their mothers. https://t.co/cSBugdydmo

Be sure and note that Conway didn’t even manage to use proper English in her tasteless attack: “They” should be “they’re.” Makes you wonder if perhaps Kellyanne earned her degree at Trump University.

While it’s certainly fair to criticize the parents who paid the bribe money to get their kids into top schools, is it really necessary to call their children stupid, especially when you consider that Conway works for a man who can barely put a sentence together when he’s asked a question?

Twitter reacted to Conway’s snide remarks by reminding her of her own hypocrisy and suggesting that children are off-limits, no matter what their parents do:

If you must, call out their parents for cheating (the irony, coming from you but on) but calling kids stupid when you are a parent of four? My god. I wish I could say that this would be a moment of self-reflection for you but we both know that it will not be.

These two are despicable.

Meanwhile, your boss is selling access to the White House. Ran a fake university and neither he or his children earned their way through any institution, more importantly, life.

Kinda almost as bad as accepting help from a foreign adversary to install a puppet regime.

Are you fucking kidding me with this pearl clutching character assassination after your “alternative facts” bullshit? Sit down Bowling Green, sit the fuck down. #TuesdayThoughts https://t.co/Ckws49sXRa

Did you not get the memo that your boss literally used a fake university for the sole purpose of scamming the gullible.