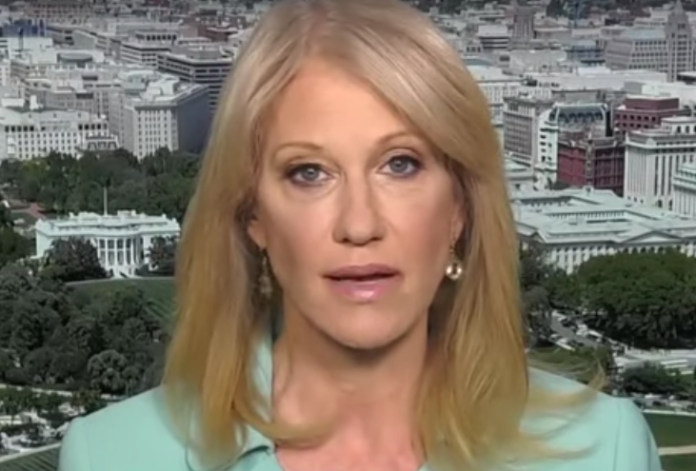 Kellyanne Conway went on CNN Saturday to defend President Donald Trump’s claim that neo-Nazis are “very fine people” before shifting into an attack against former Vice-President Joe Biden that made absolutely no sense.

After Biden had mentioned Trump’s 2017 remarks in the aftermath of the killing of Heather Heyer by Nazis in Charlottesville as one of the many reasons why he decided to enter the 2020 presidential race, Trump defended his remarks.

“I was talking about people that went because they felt very strongly about the monument to Robert E. Lee, a great general,” he claimed. “People were there protesting the taking down of the monument of Robert E. Lee.”

That’s not true and Trump knows it. What began as a protest over the removal of the statue turned into a white nationalist rally that included neo-Nazi, anti-Semitic chants and racist slogans as they marched menacingly down streets carrying torches. Counter-protesters like Heyer stood up to the hate, culminating in her murder when a Nazi ran over her with a car in an act of violence covered extensively by the media.

Instead of condemning white nationalists, Trump called them “very fine people” and blamed “both sides” for the violence.

On Friday, Biden doubled down on his condemnation of Trump’s reaction on “The View”.

“I wrote an article at the time in The Atlantic magazine, back when Charlottesville happened, saying ‘this is not who we are, there’s an American creed, it’s about decency, honor, including everyone, leaving no one behind,’” Biden said. “The idea to compare these racists, and not condemn them and neo-Nazis, and compare them to people who are genuinely decent Americans coming forward and saying ‘stop this.’ I don’t remember that ever happening in an administration before, in well over 100 years.”

When confronted about Trump’s defense of his remarks, Kellyanne Conway insisted Trump abhors racism after she feigned sympathy over Heyer’s murder.

“The President said ‘racism is evil’” she claimed. “And those who cause violence in its name are criminals and thugs.”

CNN host Mike Smerconish pointed out that “no fine person would stand alongside torchbearers who are chanting ‘Jews will not replace us.”

Rather than respond, Kellyanne evaded and chose to attack Biden instead.

“You want to revisit the way Joe Biden wants to re-visit, respectfully,” she whined. “Because he doesn’t want to be held to account for his record or lack thereof. I found his announcement video to be an unfortunate missed opportunity, but also just very dark and spooky in that he’s taking us…he doesn’t have a vision for the future.”

There was nothing “dark” or “spooky” about Biden’s announcement video, and Conway didn’t provide any examples.

She also claimed that former President Obama has refused to endorse Biden, but that’s not true at all. Biden explained on “The View” that he specifically asked Obama not to endorse him yet because he wants to win on his own merits.

Joe Biden on why he asked former Pres. Obama not to endorse him at this time: “I didn’t want it to look like he was putting his thumb on the scale here.”

“I’m incredibly proud to have served with him.” https://t.co/cVclFZyKV0 pic.twitter.com/556YLRKccM

Trump has been treating white nationalists with kid gloves since he took office. After all, they make up his base of supporters. Not only has Trump refused to say that white nationalism is a problem in the aftermath of the New Zealand mass shooting, his own Justice Department declined to charge a white nationalist with terrorism over a plot to assassinate Democrats and media figures.

Clearly, Trump has a soft spot for Nazis regardless of what he or Conway say. And that’s just one of many reasons why Biden would be a far a better president.