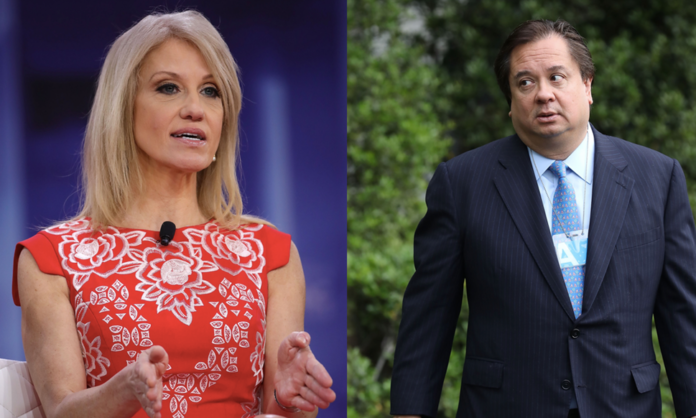 Though his wife, Kellyanne, is a senior adviser to President Donald Trump, George Conway has never made a secret of how he feels about the Trump administration, frequently criticizing the president on Twitter.

But comments Conway made to the Yahoo News podcast “Skullduggery” are the most caustic and cutting yet, with him referring to the entire Trump administration as “a shitshow in a dumpster fire.”

Conway, an accomplished attorney, also said he no longer considers himself to be a Republican:

“I don’t feel comfortable being a Republican anymore. I think the Republican Party has become something of a personality cult.”

When asked how his wife has reacted to his attacks on her boss, Conway said he’s sure she doesn’t like them, but added:

“I’ve told her, I don’t like the administration, so it’s even.”

And Conway noted that many power couples in Washington disagree with each other and get along just fine:

“If I had a nickel for everybody in Washington who disagrees with their spouse on something that happens in this town, I wouldn’t be on this podcast. I’d be probably on a beach somewhere. And the fact of the matter is, when it comes down to things we disagree about, we agree on most policy things. … So this is the one we really disagree about.”

Is George Conway pleased with what his wife did to help elect Trump? To that, he responded:

“She basically got this guy elected. She steadied that boat. … He was in the crapper when she took that campaign over.”

But when the subject turned to Trump, Conway was only too happy to blast the president:

“I’m watching this thing and, it’s like the administration is like a shitshow in a dumpster fire.”

What really upset him, Conway said, was the firing of FBI Director James Comey:

“And then you got the Comey firing, and then you got [Trump] going on TV saying, ‘I had Russia on my mind,’ and it’s like, ‘Oh, no.’ And then I’m driving home one day from from New York and it’s like ‘Robert Mueller appointed special counsel,’ and then I realized, this guy is going to be at war with the Justice Department.”

Does he think Trump is mentally stable? To that one, Conway gave a terse, “No comment,” but he did say this about Trump’s repeated attacks on the rule of law:

“We’re talking about someone who has sworn an oath to uphold the constitution and laws of the United States, and to criticize the attorney general for permitting justice to be done without regard to political party is very disturbing.”

With any luck, Robert Mueller will help us take the Trump administration and put it where it belongs: In the ash heap of history.