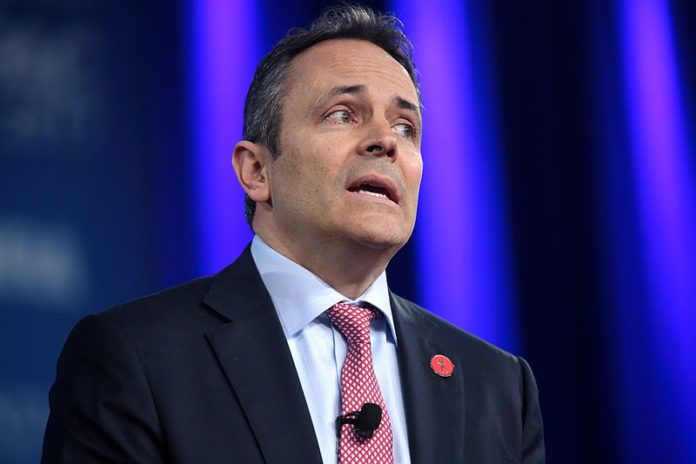 As the anti-vaxxer movement continues to gain Republican support, Kentucky Governor Matt Bevin voiced his opposition to vaccinations during an interview on Tuesday and bragged about exposing his nine children to the chickenpox on purpose to infect them.

A recent poll reveals that 61 percent of Americans support making vaccinations mandatory in the United States as more and more parents refuse to vaccinate their children over unfounded fears.

Those who don’t vaccinate their children prefer letting their kids contract diseases under the preposterous belief that making immune systems stronger is the best way to eradicate them. Because of this irresponsibility, the measles has made a comeback after having previously been wiped out from our shores because of the MMR vaccine.

Now parents apparently feel the same way about chickenpox, writing it off as a harmless virus that most children contract and then get over.

The problem is, like the measles, chickenpox can be deadly and has killed children before. It can also lead to shingles later in life.

According to the Centers for Disease Control:

So, Bevin really gambled with his children’s lives when he forced all of them to contract chickenpox by attending a so-called “chickenpox party.”

“Every single one of my kids had the chickenpox,” Bevin said, according to The Louisville Courier-Journal. “They got the chickenpox on purpose because we found a neighbor that had it and I went and made sure every one of my kids was exposed to it, and they got it. They had it as children. They were miserable for a few days, and they all turned out fine.”

But any one of those children could have died, and Bevin’s actions are tantamount to child abuse.

“In the past, some parents participated in “chickenpox parties” to intentionally expose their unvaccinated children to a child with chickenpox in hopes that they would get the disease,” the CDC says. “CDC strongly recommends against hosting or participating in these events. Chickenpox can be serious and can lead to severe complications and death, even in healthy children. There is no way to tell in advance how severe your child’s symptoms will be. So it is not worth taking the chance of exposing your child to someone with the disease. The best way to protect infants and children against chickenpox is to get them vaccinated.”

Despite Americans wanting to secure the public health through mandatory vaccines, Bevin went on to bash them instead.

“If you are worried about your child getting chickenpox or whatever else, vaccinate your child,” he said. “But for some people, and for some parents, for some reason, they choose otherwise. This is America. The federal government should not be forcing this upon people. They just shouldn’t.”

Yes, they should be. Anti-vaxxers like Bevin have put America on the verge of losing the herd immunity that vaccines have provided for decades, which helps those who can’t get the vaccine. Sometimes, side-effects happen as with any medicine, but it’s exceedingly rare and is not a valid excuse to not vaccinate kids. Bevin could have gotten one of his kids killed, and it’s a poor example that will embolden anti-vaxxers even more. And that means America’s children are only going to get sicker as they are exposed to diseases of the past that by all rights should no longer be common.