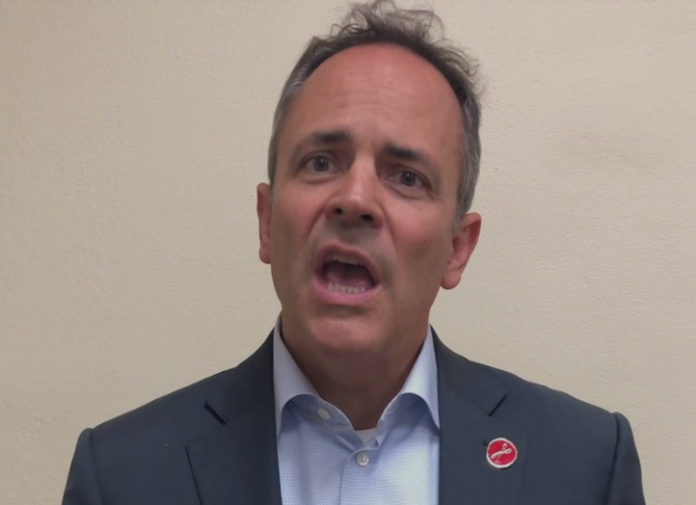 On Saturday, a white nationalist terrorist gunned down 22 people because of Trump’s hateful, racist and violent rhetoric towards immigrants. Rather than steer clear of using such rhetoric, Bevin is apparently hoping for a gun nut to attack his political opponent by using gun rhetoric to attack him.

Bashear recently talked about his Baptist religious beliefs, so Bevin whined about it in a Facebook video accusing Bashear of being a hypocrite and a fake Christian for being pro-choice on the issue of abortion.

The phrase “holding one’s power dry” is a firearm term, and it’s very unfortunate that Bevin used such a phrase even as Trump gets ripped for inciting mass shootings.

It should be pointed out that just on Wednesday, Bevin claimed America has a “culture crisis” in response to the mass shootings in El Paso and Dayton.

We have a cultural and spiritual crisis taking place in America…

To think otherwise is to turn a blind eye to reality…

Part of our “culture crisis” is people like Bevin using violent gun rhetoric against their political opponents.

This is the kind of message to right-wing terrorists that could end up getting Bashear targeted and killed. Surely, Bevin is not hoping for that, but his words are unmistakably suggestive and he should take his video down and apologize while making it clear that he does not support any type of violence against anyone, especially his political adversary, who just like millions of Christians across the country support women’s reproductive rights.