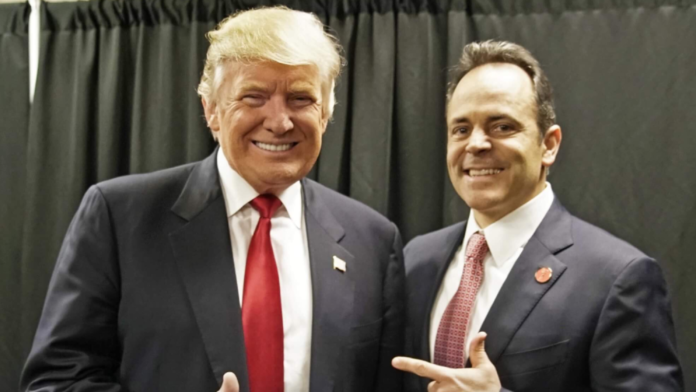 Kentucky Governor Matt Bevin (R) is one of the most unpopular politicians in the country, and there’s a very good chance that he’s going to lose in November to Democratic challenger Andy Beshear.

Bevin — who is also a staunch supporter of President Donald Trump — is angry about a Politico article that noted both Trump and Vice President Mike Pence are both planning campaign events in The Bluegrass State to try and save the incumbent governor’s flagging political fortunes, so he decided he’d post this whiny tweet:

Responding to a bogus article written by a man who’s likely never been to KY, please note that the reason ⁦@POTUS⁩ & ⁦@VP⁩ are coming to KY (where every current poll shows us winning) is because they said they would & they are men of integrity https://t.co/IuO8w4q6ba

First of all, the latest polling data shows Beshear ahead in the gubernatorial race, which is expected to be incredibly close, which is not the usual in a deep red state like Kentucky.

Also, since when are Trump and Pence men of integrity? That’s what others on Twitter wanted to know. Take a look:

Trump is a man of integrity?… and can you show a link to those polls along with the MoE?

Integrity? There are people being massacred right now because Of Trump. Because. Of . Trump. He’s coming to Kentucky to support his boot licking supporter try and win a governorship.

🤮sorry they are not men of integrity.

Integrity-“the quality of being honest and having strong moral principles” Really? Over 14K documented lies/misleading comments, no regard for rule of law, abandoned US Constitution?https://t.co/fw4eO1DdEM

Trump and the word integrity should never be used in the sentence…. EVERRRR!!!!!

You know as much about integrity as you do about governing – nothing.