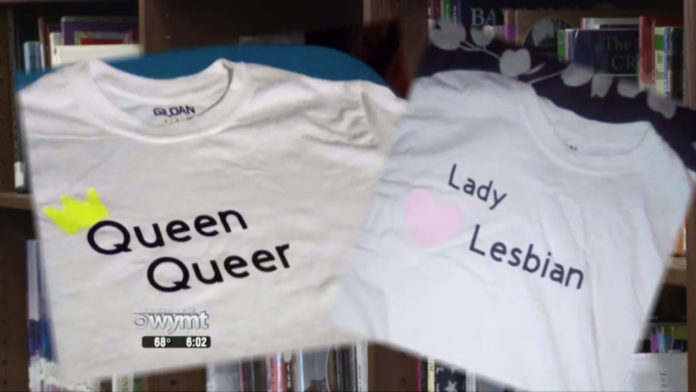 A high school in Kentucky is being criticized for making students wearing pro-LGBT T-shirts change their clothes even though clothing with the Confederate flag is allowed on campus.

Multiple students at Martin County High School were forced to change shirts after a school administrator claimed they violated the dress code.

“It started off around Thursday of last week,” recalled student Lilly Vance. “They were wearing gay pride shirts to school and they all got dress coded for it.”

The shirts in question read “Lady Lesbian” and “Queen Queer.”

Vance noted that she thinks there’s a double standard in place at the school:

“Kids wear political shirts. They wear Confederate flag shirts. I just don’t understand what’s so wrong with wearing gay pride shirts. Nothing we’re doing is wrong. All we are doing is expressing who we are.”

“I don’t think it’s fair because I see people walking around school with Confederate flags on their boots, hats, shirts, and even belt buckles.

“I hope that we as LGBTQ students and people as a whole will be treated equally because right now that’s not what it’s looking like.”

Asked about the controversy, Superintendent Larry James issued a statement which reads:

“Any miscommunication has been resolved. We definitely do not want any of our students to feel like they are discriminated against.”

Vance also told WYMT that she’s hopeful this will never happen before, and that her intent is to be respected the same as any other student at the school.

“We’re not asking you to believe in what we believe in. We’re just asking for respect.”

The next step, according to Vance is to form a GSA group at the school so that LGBT students feel welcome instead of isolated or shunned:

“It means Gay-Straight Alliance. It’s for kids who don’t feel safe at home, who just need people to talk to and feel safe and secure. I think everyone deserves that.”