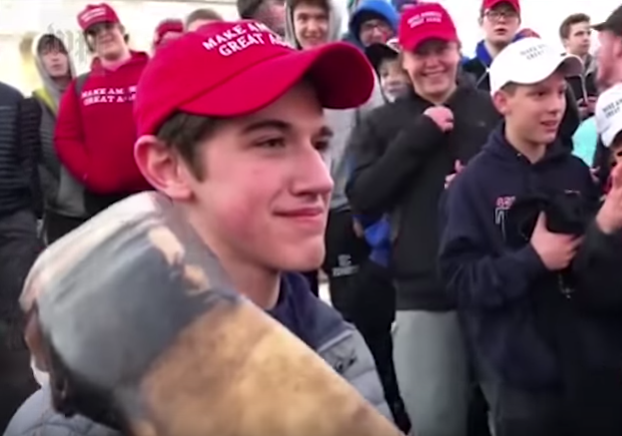 A federal judge wiped the smirk off the face of Kentucky MAGA hat teen Nick Sandmann on Friday by laughing his frivolous $250 million lawsuit against the Washington Post out of court.

Sandmann and his smirk went viral after video surfaced of him standing in the way of a Native American man named Nathan Phillips.

Sandmann and several of his Covington Catholic school classmates were waiting for buses at the Lincoln Memorial when the encounter took place.

Phillips later told the Washington Post that the teens were blocking his path and refused to get out of his way.

“It was getting ugly, and I was thinking: ‘I’ve got to find myself an exit out of this situation and finish my song at the Lincoln Memorial,’” Phillips said. “I started going that way, and that guy in the hat stood in my way, and we were at an impasse.”

It certainly looked like Sandmann was preventing Phillips and other Native Americans from passing through, and his smirk didn’t help matters either.

Soon, the video and pictures went viral, and Sandmann and his cohorts were labeled “racists.”

Again, it didn’t help that they were wearing red MAGA hats that are now considered a racist symbol. It also doesn’t help that President Donald Trump is a racist who refers to Senator Elizabeth Warren (D-Mass.) as “Pocahontas”.

Anyway, Sandmann filed multiple defamation lawsuits against CNN, MSNBC and the Washington Post, all of which Trump attacks on a regular basis. He is seeking hundreds of millions of dollars because his white privilege feelings were hurt.

Well, U.S. District Judge William Bertelsman didn’t buy it and dismissed Sandmann’s snowflake lawsuit on the grounds that it was “not supported by the plain language in the article” published by The Post.

“The Court accepts Sandmann’s statement that, when he was standing motionless in the confrontation with Phillips, his intent was to calm the situation and not to impede or block anyone,” Bertelsman wrote. “However, Phillips did not see it that way. He concluded that he was being ‘blocked’ and not allowed to ‘retreat.’ He passed these conclusions on to The Post. They may have been erroneous, but … they are opinion protected by the First Amendment.”

Perhaps, next time, Sandmann and his friends will think twice before wearing their MAGA hats if they don’t want to be called racists.