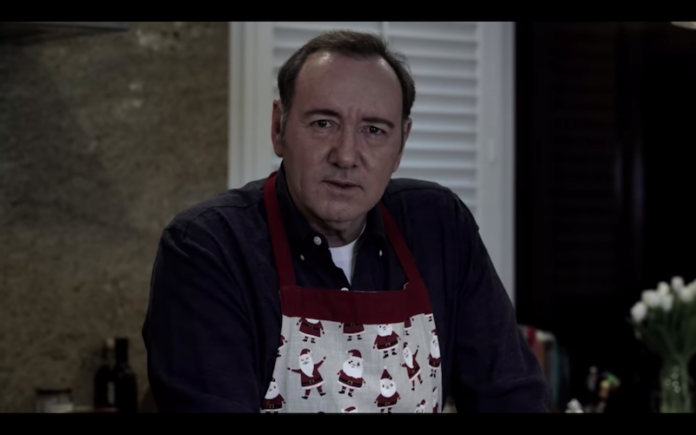 This Christmas, disgraced House of Cards star Kevin Spacey decided that what we all needed was a little more of Frank Underwood. The 59-year-old has been keeping a low profile since accusations last year from Broadway veteran Anthony Rapp brought his life and career under intense scrutiny.

Rapp claims that Spacey tried to “seduce” him at a party while Rapp was 14 and Spacey was 27, including by laying on top of him. In a statement, Spacey, while denying the accusations, excused his actions by calling it, “deeply inappropriate drunken behavior.” Spacey also came out as gay in his letter, a move roundly criticized by those who felt he was attempting to gin up sympathy.

Now he is back, with a character inspired his role on House of Cards, President Frank Underwood. In the three-minute video titled “Let Me Be Frank,” Spacey breaks the fourth wall (a common HoC trope) and says:

“Of course, some believed everything and have just been waiting with bated breath to hear me confess it all. They’re just dying to have me declare that everything said is true and that I got what I deserved. Wouldn’t that be easy, if it was all so simple? Only you and I both know it’s never that simple, not in politics and not in life.”

As in the Rapp incident, Spacey seems to be saying both that he did and did not do something, at times saying he is “not sorry” and at others insinuating that the whole situation is fabricated by bad actors.

The confusion surrounding Spacey’s video began to clear as a story broke he is charged for felony sexual assault in Massachusetts. According to The Hollywood Reporter, Spacey “will be arraigned on a charge of indecent assault and battery at Nantucket District Court in Massachusetts on Jan. 7. The alleged assault on a teenage male victim took place at a Nantucket bar in July 2016.”