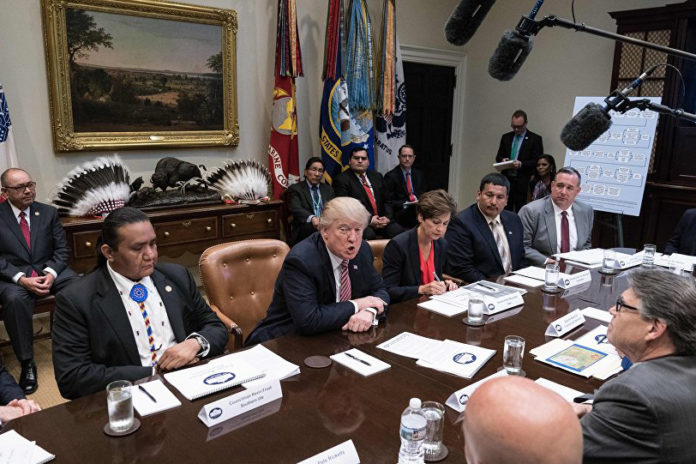 Trump genuinely does not understand how government works. Pay attention, because his behavior in the coming months will likely worsen.

At a meeting with a group of Native American tribal leaders last June, Axios reports that the President urged leaders to bypass federal regulations and extract whatever resources they wanted from their land.

The exchange gives us a revealing glimpse into how Trump views his presidential powers. Much like the world of show business and real estate, the president wants to cuts deals, cut corners, and push whatever agenda suits his interests.

“Just do it,” the president urged.

The chiefs were surprised. They explained to Trump that there were regulatory barriers in place preventing them from harvesting fuels from their lands. Trump, who apparently has no regard for the law, replied, “But now it’s me. The government’s different now. Obama’s gone, and we’re doing things differently here.”

The leaders were stunned. That didn’t faze Trump.

The tribal leader turned to someone; presumably, a White House counsel, asked, “Can we just do that?” The official did not confirm that what the president had suggested was legal, but also insisted that the administration was making progress and plans to roll back various regulations.

This kind of behavior is increasingly the norm in Trump’s White House. The president considers himself a king: above the traditions, limits, and laws of the presidency.

Here are some points to take away:

In other words, there are more shockwaves to come. Brace yourself and stay focused.