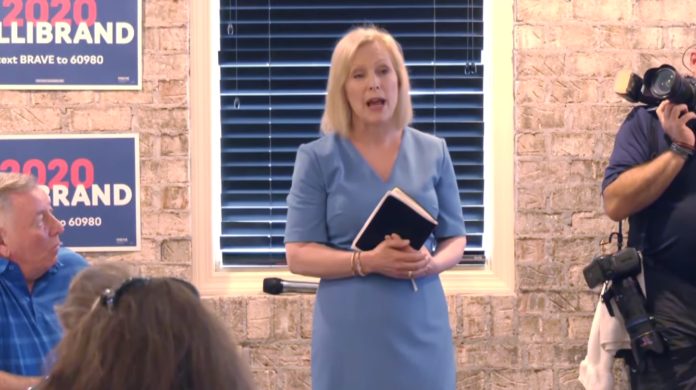 During a campaign stop in Youngstown, Ohio, on Thursday for her 2020 presidential campaign, Senator Kirsten Gillibrand (D-NY) was asked about white privilege by a voter, and her response is something all of us can learn from.

A voter in the audience asked Gillibrand:

“This is an area that, across all demographics, has been depressed because of the loss of industry and the opioid crisis. What do you have to say to the people in this area about so-called white privilege?”

The senator began by saying she understood that “families in this community are suffering deeply” and it “is not acceptable and not OK” for anyone to have to experience financial hardships. But, she quickly added, that wasn’t what the conversation was really all about, and she continued:

“What that conversation is about is when a community has been left behind for generations because of the color of their skin. When you’ve been denied job after job after job because you’re black or because you’re brown. Or when you go to the emergency room to have your baby ― the fact that we have the highest maternal mortality rate, and if you are a black woman you are more likely to die in childbirth because that health care provider doesn’t believe you when you say, ‘I don’t feel right.’

“So institutional racism is real. It doesn’t take away your pain or suffering. It’s just a different issue. Your suffering is just as important as a black or brown person’s suffering. But to fix the problems that are happening in the black community, you need far more transformational efforts that are targeted for real racism that exists every day.”

Gillibrand’s response was met with a round of applause from those at the campaign event.

This isn’t the first time Gillibrand has addressed the issue of institutional racism. Speaking to Rev. Al Sharpton’s National Action Network, she noted:

“It is wrong to ask men and women of color to bear these burdens every single day, the same fights over and over. White women like me must bear part of this burden and commit to amplifying your voices.”

We all have to bear that burden. We all have to commit to amplifying the voices of those who are too often ignored. White privilege is real, despite what some may say. To deny that is to deny what we see around us on a daily basis.