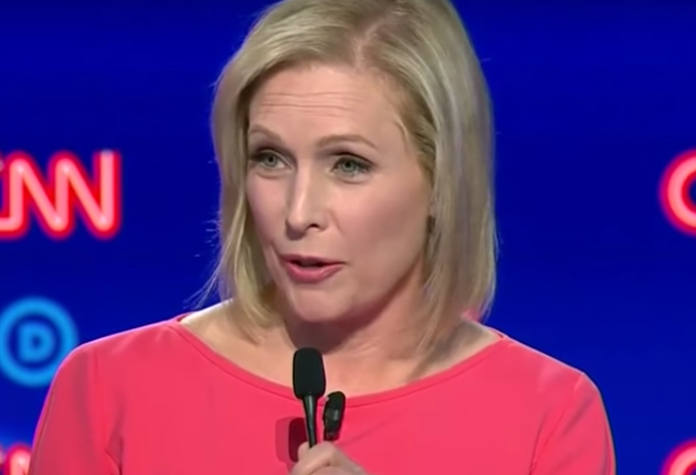 Senator Kirsten Gillibrand (D-N.Y.) severely dinged President Donald Trump to kick off night two of the second Democratic debate on Wednesday, and the Internet loves her for it.

When asked about the first thing she would do as president, Gillibrand delivered a one-liner to express how disgusting Trump is.

She’s probably right that the White House could use a good wipe-down with bleach after Trump leaves office. After all, he’s a nasty man who hurls racism and sexism every chance he gets and he’s friends with several pedophiles, including Jeffrey Epstein. Trump has also been accused of rape.

Gillibrand not only received cheers from the audience, people cheered her on via social media as well, and even had some things to add.

Clorox, Lysol, CLR, followed by a fumigation, and the burning of sage to rip the infestation out Root and Stem. pic.twitter.com/R3MCDkL6ES

Use a black light, just to be sure.

This is perfect! Countdown to DT’s tweetrum…3,2,1…

A couple of dozen RAID bug bombs and some D-Con rat traps would probably help too.

I’ve been clear that I don’t like when ANYONE says “When I’m President…” but @SenGillibrand saying that “when” she is, she will first @Clorox the Oval Office got her points! ?✊?#DemDebate

While Gillibrand did deliver a great line, it’s probably not enough to save her abysmal poll numbers. Right now, former Vice-President Joe Biden leads the pack while Senators Bernie Sanders (D-Vt.), Elizabeth Warren (D-Mass.) and Kamala Harris (D-Calif.) are not too far behind.

The line, however, did do one thing. It united Democrats in agreement that Trump is disgusting.