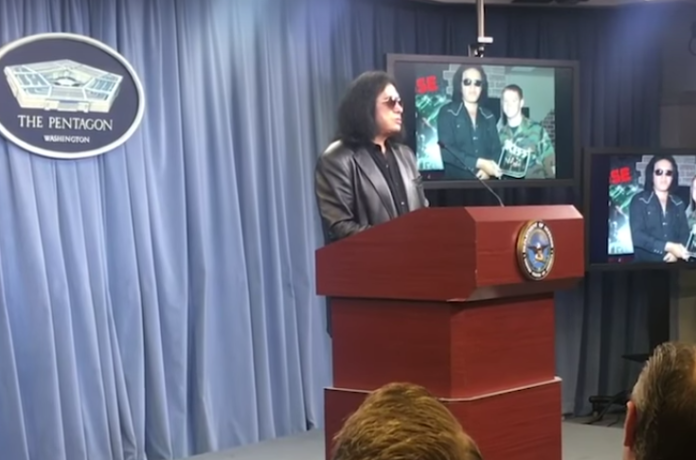 Not since May 31, 2018, has a Pentagon spokesperson briefed the press. So, President Donald Trump insulted the press again by having KISS front-man Gene Simmons do it on Thursday. Seriously.

As Trump marches the United States closer to war with Iran and negotiations with North Korea continue to deteriorate, the American people and the press need the Pentagon to answer questions more than ever. But for the last year, the Pentagon press room has been just a room rendered useless.

Simmons was at the Pentagon to promote the military and he later visited Trump in the White House.

During the press briefing, Simmons spoke about his mother, a survivor of the Nazi concentration camps, and her love of the United States military.

“My mother was a survivor of Nazi Germany,” the singer told journalists while holding back tears. “My mother just passed at 93, but if Americans could see and hear my mother talk about America, they would understand.”

“Every time my mother saw the flag, she’d start crying,” Simmons, who was born in Israel, continued. “As an eight-year-old boy, I didn’t understand why, but from my mother’s point of view, we were finally safe. I may have been born in the country that people throughout history have referred to as the Promised Land, but take my word for it. America is the Promised Land for everybody.”

That’s all well and good, but the Pentagon itself has not briefed the press for over a year while the world is falling apart. The American military is already involved in conflicts in Afghanistan, Iraq, Syria, Yemen and elsewhere. Russia remains a threat to NATO and our democratic process heading into 2020 and now we are heading toward conflicts with North Korea and Iran.

Trump has already ordered an aircraft carrier group to the Middle East amid rising tensions and is considering sending 120,000 troops there as well. That’s an invasion force comparable to how many troops were sent to Iraq by former President George W. Bush. We don’t need to hear Simmons promote the military, we need answers on how our military is being used and why.