The United States Blues
Home News Latest thing one can’t do when black — Be a policeman in... 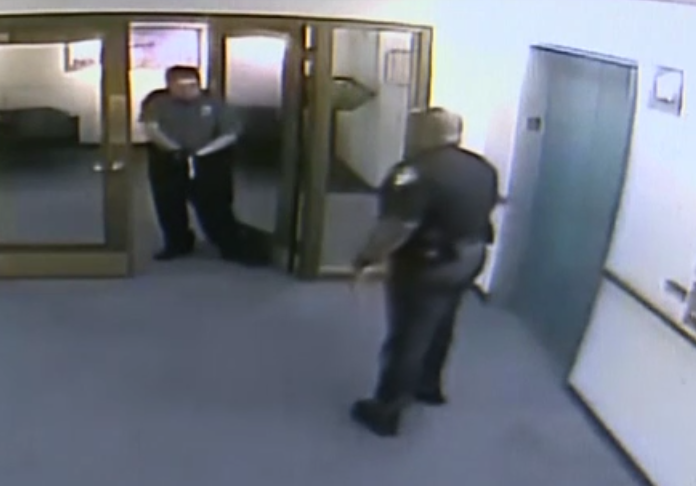 A white security guard at an IRS office made a huge mistake back in May when he drew his gun on a black deputy sheriff in full uniform.

Apparently, it’s not enough black men are being killed or having guns drawn on them for just about any reason nowadays by police, even black police officers are at risk of being shot and killed just for policing while black.

As an officer, Alan Gaston is not allowed to leave his service weapon inside his police car. It has to go wherever he goes because if he leaves it behind and it gets stolen, he’s liable for whatever happens.

That’s why these police regulations exist. But despite Gaston explaining that to white security guard Seth Ecklund, he still had a gun pulled on him and aimed at his back.

Gaston entered the Ohio IRS office to ask a question about a letter he had received. Officers routinely enter places with their guns holstered and it certainly should not cause concern.

But Ecklund decided to play cop and attempted to arrest Gaston for carrying his gun inside even though officers are legally allowed and obligated to carry their service weapon with them.

Gaston made every effort to de-escalate the situation, fearing for not only his life but for the lives of others if this wannabe cop decided to pull the trigger.

“Basically preparing myself to be shot at that moment. Bracing for a shot in my back,” Gaston told ABC 13.

“There’s really no way to know how you’re going to act when there’s a gun pointed at you and when you think you’re going to lose your life,” he said. “If I’m going to get shot, like I thought I was, it’s not fair. [Civilians] came in there to do their business.”

The whole scary scenario was caught on video. The guard even called police on the deputy and neglected to inform them that Gaston is a police officer.

And when the officers arrived, Ecklund finally backed down, but he’s clearly not qualified to continue being a security guard and he’s being sued by Gaston.

“I would say ‘Clearly your training is lacking and the fact that you went 0 to 100, lethal force, is unacceptable,” Gaston said.

Ecklund faces a charge of aggravated menacing, but his behavior is unacceptable and he should be fired and barred from ever having a job that requires carrying a gun.