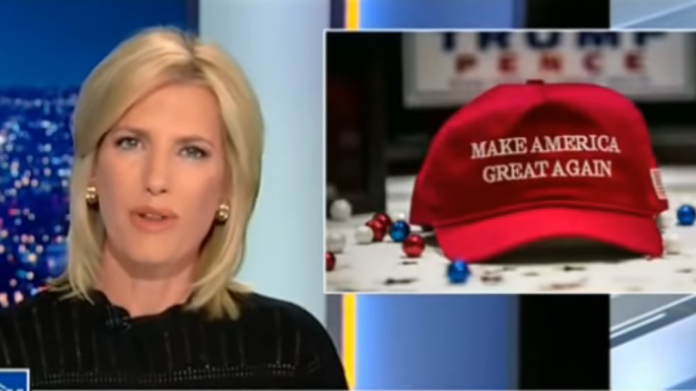 According to Fox News host Laura Ingraham, MAGA hats don’t represent racism, hate, or ignorance. Instead, they’re a the very opposite of that and should be worn with great pride.

On her show Thursday evening, Ingraham noted that based on the coverage of the entire Trump movement presented on television, “it’s now gotten so bad in America that wearing a Trump hat is basically considered a hate crime.”

Well, Laura, you know the old saying: If the shoe (or in this case the hat) fits…

Ingraham also maintained that there’s absolutely nothing racist about President Donald Trump or his policies:

“Not only is this conservative agenda working, it’s working really well for minorities.”

Calling Mexicans rapists and drug dealers and declaring there are “fine people” in the neo-Nazi movement the way Trump did after Charlottesville isn’t racist, anti-immigrant, and scary? Laura must be using the MAGA dictionary for her definitions.

As Mediaite reports, Ingraham was just getting warmed up with her full-throated defense of Trump and his most fanatical supporters:

“She said that the resistance doesn’t care about those successes and want people to be ‘angry and resentful’ instead. Republicans should ‘actively engage in minority communities’ and not ‘be bullied out of them,’ she said, and the President and his cabinet should ‘travel to cities like Oakland and Chicago and Baltimore, not just to safe zones in red states’ and meet with people and listen to them.”

That, of course, will happen right after hell calls and announces it has officially frozen over.

Near the end of her ridiculous monologue, Ingraham offered some advice to those who wear their MAGA hats in public:

“Well, I would continue to wear them whenever and wherever you like. And when doing so, be sure to show everyone around you what true tolerance, kindness and inclusiveness looks like.”

Trumpkins being tolerant, kind, and inclusive? There’s a better chance Fox News will become impartial and a reliable source of information.