The United States Blues
Home News Laura Ingraham urges a ban on all immigration before a ‘huge demographic... 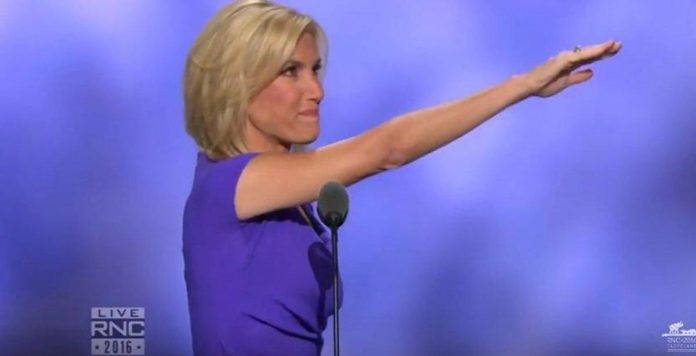 Fox News host Laura Ingraham says that she’s angry congressional Republicans didn’t put an end to all immigrants coming to the United States when they had control of both houses of Congress and that President Donald Trump’s tax cuts for the wealthiest Americans are going to be “bled away” by those coming to the U.S. for asylum.

On “The Laura Ingraham Show Podcast,” the always abrasive host began by attacking the GOP for not shutting down all immigration when they held the House and Senate during Trump’s first two years in office:

“Because they could’ve done this and they didn’t do it and they decided not to do it. And they were doing other things, and the tax cut and all that.”

Instead, Ingraham continued, the tax cut will be wasted:

“But tax cut’s value is going to be bled away if we lose the country because of this huge demographic shift and bleed the country with all of these expenses we have now. So, it’s a massive problem.”

What Ingraham neglected to mention is that the three biggest items in the federal budget are Social Security, Medicare, and defense spending. How exactly are those impacted by immigration? Wouldn’t more legal immigration lead to more workers and therefore to larger tax revenues? That sounds like a win-win for the country.

As HuffPost points out, Ingraham has long trafficked in disgusting and hateful lies:

It’s just one of the multiple white nationalist talking points that Ingraham has hawked to her millions of viewers and listeners in recent years.

“Massive demographic changes have been foisted on the American people, and they are changes that none of us ever voted for, and most of us don’t like,” she added last year, relating it “to both illegal and legal immigration.”

This is the rhetoric being used by mass shooters to justify their murders and it’s also something Fox News’ 10 PM host says a lot https://t.co/JNcaKrP8XN

Last year, Ingraham blamed “massive demographic changes” for making it “seem like the America we know and love doesn’t exist anymore,” comments she tried to walk back.

Now she’s saying we’re going to “lose the country because of this huge demographic shift” https://t.co/G58hh8J4nr

Ingraham (@IngrahamAngle) is so blinkered she is unaware that the history of the US is nothing but huge demographic shifts.
Of course, her early progenitors thought that the Irish, Italians, Poles & Jews weren’t white. https://t.co/DHYVkUXJPc

Laura Ingraham worried about the “huge demographic shift”. The Aryan race doesn’t seem to do well with competition. https://t.co/MwrVmKnU94