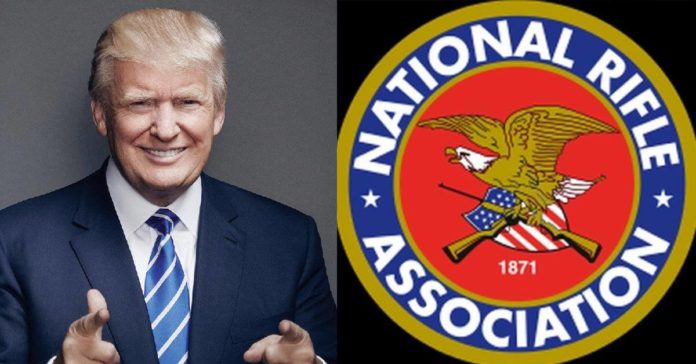 During the 2016 election, one of the biggest donors to Donald Trump’s campaign was the National Rifle Association (NRA), which funneled $30.3 million in contributions to the GOP nominee, which is significantly more than is allowed by law.

Thanks to a lawsuit filed by Giffords, the the nonprofit organization founded by former Rep. Gabrielle Giffords (D-AZ), against the Federal Elections Commission (FEC), who now have a clearer picture of just how much the NRA did in order to assure that Trump won the presidency, and the scope of the investment made by the gun lobby is staggering.

The lawsuit, it should be noted, mentions the name “Trump” 35 times, and details exactly how the NRA sought to skirt the law in order to make sure they could shovel millions to him and his campaign:

“Plaintiff’s complaints demonstrate that the National Rifle Association (‘NRA’) violated the Federal Election Campaign Act by using a complex network of shell corporations to unlawfully coordinate expenditures with the campaigns of at least seven candidates for federal office, thereby making millions of dollars of illegal, unreported, and excessive in-kind contributions, including up to $25 million in illegal contributions to now President Donald J. Trump.”

And then there’s how the NRA created those shell companies, knowing full well that what they were doing was illegal:

“By coordinating their advertising strategy in this manner, the NRA-PVF and the NRA-ILA have made up to $35 million in contributions to candidate campaigns since the 2014 election, in excess of the contribution limits, in violation of the source restrictions, and without the disclosure required under federal law. This includes up to $25 million in coordinated, illegal contributions to the Trump campaign in 2016.”

The lawsuit is just the latest bad press for the NRA, which is reportedly being torn apart by warring factions and infighting, according to the Associated Press:

“NRA insiders and longtime observers describe an organization at war with itself over a central question: Has it strayed too far from its original mission of gun safety and outdoor shooting sports and become too political?”

Money is also in short supply at the NRA, and that could mean it won’t be able to help Trump in the 2020 election. Some have even suggested the organization is on the verge of total collapse. Ironically, the same appears to be happening to Donald Trump’s presidency.