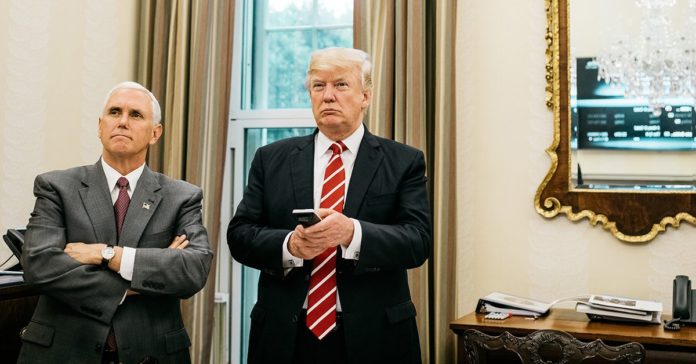 Several months ago, we learned that when President Donald Trump isn’t involved in the official duties of his office, he takes what White House staffers refer to as “executive time.” What does that consist of? Well, the administration has said Trump spends two or three hours a day watching cable news, tweeting, and making phone calls to friends.

But thanks to a new report from Politico, we now know that Trump actually spends several hours a day engaging in “executive time”:

“President Donald Trump had about three times as much free time planned for last Tuesday as work time, according to his private schedule. The president was slated for more than nine hours of ‘Executive Time,’ a euphemism for the unstructured time Trump spends tweeting, phoning friends and watching television. Official meetings, policy briefings and public appearances — traditionally the daily work of being president — consumed just over three hours of his day.”

Yes, you read that correctly: The current president sometimes spends nine hours a day doing everything other than what he was elected to do. Is it any surprise he often seems  totally unprepared and out of touch when asked a question?

As Mack McLarty, who served as chief of staff for President Bill Clinton noted, the way a president spends his time is a direct reflection of what he considers most important:

“The president’s time is in many ways his most valuable commodity because it’s finite. It reflects his priorities. It reflects what he’s trying to get done with the country.”

Taking McLarty’s comments into consideration, it should come as no surprise that Trump has been unable to pass any legislation other than a tax cut for the richest 1 percent of Americans in his first two years as head of state.

In contrast, Trump’s predecessor in office, Barack Obama, often had policy meetings and other official business scheduled for seven or eight hours a day in addition to the time Obama would spend in the evenings reading intelligence reports or other business related to his role as leader of the free world.

Under former chief of staff Reince Priebus, Trump often complained that he had no “time to think.” The president often complained of being overscheduled, a former Trump administration aide recalled:

“There was always this tug and pull early in the administration when Priebus was there because if there were too many things on his schedule, he would complain. But if there were too few things on his schedule, the senior staff would complain because he would be left to his own devices and spend more time watching TV or calling people on the phone or calling in advisers unscheduled to the Oval Office.”

So congratulations Trump voters! You elected the laziest president in history.