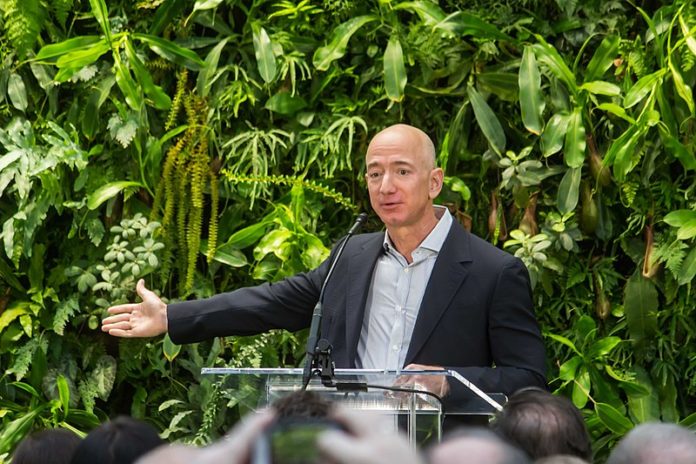 The National Enquirer is in the crosshairs of federal prosecutors again after Amazon founder and CEO Jeff Bezos accused the tabloid and its parent company AMI of trying to blackmail him using text messages and photos it somehow obtained.

Bezos revealed the scheme in a blog post on Thursday in response to emails demanding that he publicly end private investigations against the tabloid and say that The National Enquirer’s coverage of his divorce from his wife of 25 years is not “politically motivated.”

“If in my position I can’t stand up to this kind of extortion, how many people can?” Bezos asked. “They will publish the personal photos unless…I make the specific false public statement to the press that we “have no knowledge or basis for suggesting that AMI’s coverage was politically motivated or influenced by political forces.”

“Of course I don’t want personal photos published, but I also won’t participate in their well-known practice of blackmail, political favors, political attacks, and corruption,” Bezos concluded, including copies of emails as proof of his accusations. “I prefer to stand up, roll this log over, and see what crawls out.”

The National Enquirer secured an immunity deal from federal prosecutors from the Southern District of New York last year after agreeing to testify against President Donald Trump and his former fixer Michael Cohen about the tabloid’s role in covering up Trump’s extramarital affairs during the 2016 campaign.

Part of that deal apparently bars the tabloid from engaging in more crimes.

Legal experts weighed in on Twitter with bad news for The National Enquirer and its owner David Pecker, a friend of Trump.

This is one way to blow up an immunity agreement. https://t.co/8tBzdqwayn

Attempting to blackmail someone is a crime. 18 USC 873. There’s also possibly extortion here but you should probably focus on what you’re focusing on b/c it’s completely immaterial.

9/ So is this extortion or blackmail, as Bezos claims?

Yes, given the ordinary meaning of those terms. But whether this is actually a *crime* is much more complicated than that.

Situations like this are common and I have represented clients in a situation similar to Bezos.

Is it consistent with some of the questionable practices that AMI engaged in on behalf of Trump and others? Yes.

But is this the sort of case federal prosecutors would charge as extortion? No.

18/ But if this wasn’t a crime, it doesn’t violate the agreement. It does shift things to an extent because prosecutors could claim that this was a crime and use that to void the Non Prosecution Agreement.

Right. Kudos to @JeffBezos for letting it all hang out rather than wilting in front of the Trump-backing Enquirer https://t.co/32hQwdY2Ad

Are Donald Trump and the murderous Saudi Prince bin Salman co-conspirators with David Pecker and AMI in a failed criminal plot to blackmail and extort Jeff Bezos as owner of the Washington Post? Asking for a friend in the Southern District of New York.

It’s a fair question considering Trump attacked Bezos on Twitter after news of his divorce broke and even praised The National Enquirer.

Frankly, even if federal prosecutors do not charge AMI with a crime, Bezos could absolutely ruin the company with years of legal battles that would cripple Pecker and his company. After all, AMI has declared bankruptcy once before after being $1 billion in debt. Bezos is the world’s richest man with over $100 billion at his command. If billionaire Peter Thiel can fund Hulk Hogan’s lawsuit against Gawker for publishing a sex tape to shut the company down, Bezos certainly has the money and the clout to do the same to AMI for publishing photos and text messages.