The United States Blues
Home Activism Leigh Corfman Speaks To Today Show – Why Now? In Her Own... 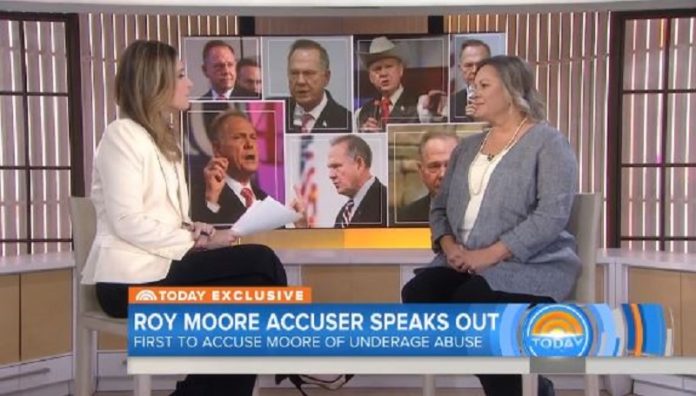 Those of us that were around in 1979 were still talking about Luke Skywalker (Mark Hamill), Han Solo (Harrison Ford), and Sigourney Weaver. Star Wars was still a phenomenon, and Alien was due out soon. Teenagers spent their time in school, at roller rinks, and watching movies. Those were the mainstay of our youth.

But Leigh Corfman had a different experience — she was being molested at the age of 14 by a man who made a habit of preying on teen girls. For more than two years before he molested Corfman, local police knew about the man and his habits — but rather than do anything about it, they laughed and treated it like a joke. It wasn’t a joke for Leigh Corfman.

Corfman, finally able to deal with what happened to her almost 40 years ago, made her story public. She alleged that Senate candidate Roy Moore sexually abused her. She was 14 years old in 1979 — he was 32 at the time and serving as a district attorney in Etowah County, Alabama.

Corfman is dealing with her emotional pain and the fact that she has kept this bottled up for so long, telling NBC’s TODAY show that she “didn’t deserve to have a 32-year-old man prey upon” her. In her first televised interview since making the allegations, Corfman, who is now 53, “said she was simply a ’14-year-old child playing in an adult’s world,’ when Moore initiated a sexual encounter with her.”

I met him around the corner from my house, my mother did not know and he took me to his home. After arriving at his home on the second occasion that I went with him he basically laid out some blankets on the floor of his living room and proceeded to…seduce me, I guess you would say.

Corfman opened herself during the interview:

I was expecting candlelight and roses, what I got was very different. I felt like I was the one to blame. It was decades before I was able to let that go. I was a 14-year-old child trying to play in an adult’s world and he was 32 years old.

A total of nine women have come forward alleging similar accusations against Moore. He has repeatedly denied all of the allegations and is blaming political opponents, saying they and the media have orchestrated the reports and complaints against him. In a message repeated by his campaign, Moore said, “I am not guilty of sexual misconduct with anyone.”

When asked about Moore’s denials and his claims that he doesn’t even know her, Corfman responded:

I wonder how many ‘me’s’ he doesn’t know.

Corfman spoke about why she waited to come forward, stating that, “my family knew, family friends knew.” Several years after the incidents, Corfman worried that fallout would affect her small children. She was a single parent. When the Washington Post initially contacted her, she told them if they found other victims, she would make her story public. Others came forward, and Corfman joined them.

I didn’t go looking for this, it fell in my lap.

Corfman stated that she did not receive any compensation for telling her story, and that, “if anything, this has cost me.” She looks forward “to being an advocate for people like me” and has already seen “positive results from having told her story.”

I’ve had a lot of people that have come out and have said that because of my courage that they’re able to do the same.

The people of Alabama are scheduled to vote on December 12 to fill the Senate seat that opened when Jeff Sessions moved up to become President Donald Trump’s Attorney General. After a contentious Republican primary and run-up election, Roy Moore emerged as the sole Republican candidate running against Democrat Doug Jones. Alabama governor Kay Ivey will still be voting for Moore, but he has lost a lot of high-level endorsements as a result of these allegations.

Since we already have the P***y-Grabber-in-Chief, it’s no real big deal if we put another sexual offender in the Senate, right? At least they’ll have something in common.