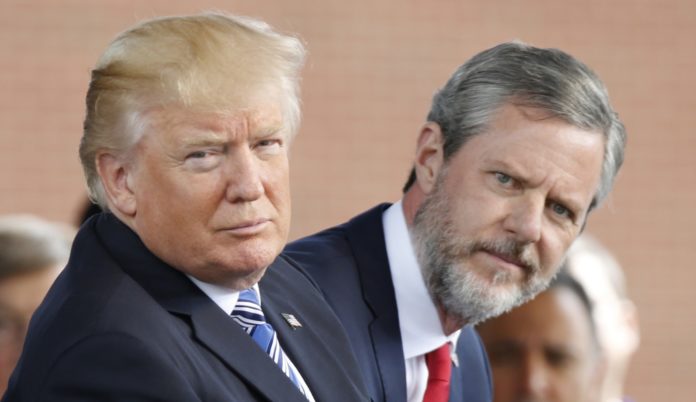 Jerry Falwell Jr. serves as the president and chancellor of Liberty University, which has a total enrollment of 110,000 students, most of whom are enrolled in online courses, and has become a business empire that some have compared to “a real estate hedge fund.”

But now the curtain is being pulled back on the many questionable activities of Falwell and Liberty thanks to a report from Politico in which two dozen current and former high-ranking officials at the university alleging that Falwell runs the operation like a dictator and engages behavior that would seem to contradict his so-called “Christian” beliefs.

According to the report, money and power are the allegedly the main goals of everything Falwell and his wife do:

In interviews over the past eight months, (sources) depicted how Falwell and his wife, Becki, consolidated power at Liberty University and how Falwell presides over a culture of self-dealing, directing university resources into projects and real estate deals in which his friends and family have stood to make personal financial gains. Among the previously unreported revelations are Falwell’s decision to hire his son Trey’s company to manage a shopping center owned by the university, Falwell’s advocacy forloans given by the university to his friends, and Falwell’s awarding university contracts to businesses owned by his friends.

And then there’s the allegations of inappropriate behavior by Falwell:

Liberty employees detailed other instances of Falwell’s behavior that they see as falling short of the standard of conduct they expect from conservative Christian leaders, from partying at nightclubs, to graphically discussing his sex life with employees, to electioneering that makes uneasy even those who fondly remember the heyday of the late Rev. Jerry Falwell Sr., the school’s founder and Falwell Jr.’s father, and his Moral Majority.

Another former Liberty employee recalled a car ride he took with Falwell:

“All he wanted to talk about was how he would nail his wife, how she couldn’t handle [his penis size], and stuff of that sort.”

Falwell has been a strong supporter of President Donald Trump ever since Trump announced his candidacy. And according to the Wall Street Journal, the Liberty University chancellor also paid someone to manipulate online polls to favor Trump. So brazen was the move to bolster Trump that his son, Trey, later posted a now-deleted photo on Instagram that seemed to suggest he had paid a man named John Gauger $12,000 for his work to boost the polls in Trump’s favor.

So complete is Falwell’s grip on what takes place a Liberty University that a high-level employee who still works at the university confided:

“It’s a dictatorship. Nobody craps at the university without Jerry’s approval.”

“It’s a dictatorship. Nobody craps at the university without Jerry’s approval.”

Taken together, all of this suggests that Falwell runs Liberty University much the same way as Trump governs and manages the White House:

Under Falwell Jr., Liberty University is “a totally dysfunctional organization,” one board member wrote in an email reviewed for this article. “Very similar to Trump’s White House.”