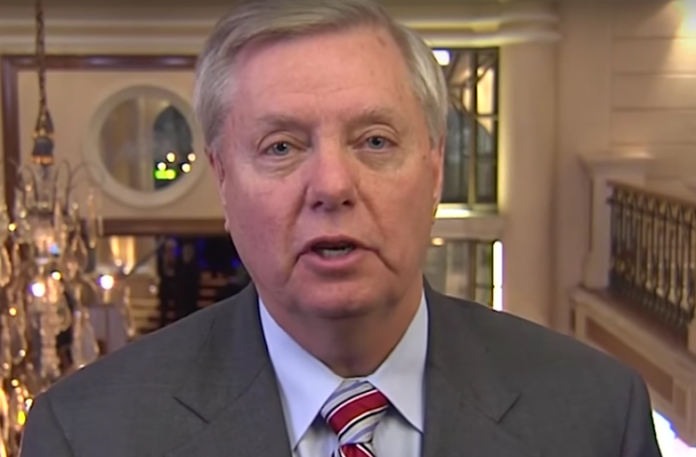 Trump declared a national emergency on Friday in order to steal money appropriated by Congress for other projects in order to use it to build his wall. Some of that money had been earmarked to build new schools in states across the country. Basically, Trump is taking money from children and robbing them of a better future to fund the construction of a wall that will be ineffective to stop drugs and illegal immigration and that a majority of Americans oppose.

Face The Nation host Margaret Brennan began the interview with Graham by pointing out that Trump said he “didn’t need to do this” during his announcement, rendering his declaration a non-emergency that will bring about more lawsuits challenging him in court.

As a lawyer, Graham should know that Trump’s own words weaken his hand, but he refused to adhere to reason and denied that Trump has undermined himself.

He even repeated Trump’s lies about drugs and a so-called “invasion” despite the fact that most drugs come through legal ports of entry, which a wall won’t stop, and illegal immigration numbers are at a record low.

Brennan then pointed out that by raiding military construction funding, Trump is taking money that is slated to be used to build a middle school in Kentucky and housing for military families.

But Graham, who claims to support military families, did not give a damn.

“The president will have to make a decision on where he gets the money,” Graham said. “Let’s just say for a minute that he took some money out of the military construction budget. I would say it’s better for the middle school kids in Kentucky to have a secure border. We’ll get them the school they need, but right now, we’ve got a national emergency on our hands.”

Seriously. Graham thinks a useless vanity wall is more important than making sure our children are properly educated in new modern school facilities. He would rather kids learn in crumbling learning environments as long as Trump gets his wall, all while America falls behind the rest of the world in science, math, and civics. That really says it all about how out of touch Republicans are with the needs of the American people. A wall for an imaginary problem is more important than the real crises we face.

Of course, this is nothing new as Press Secretary Sarah Sanders proudly declared last year that the wall is more important than school shootings.