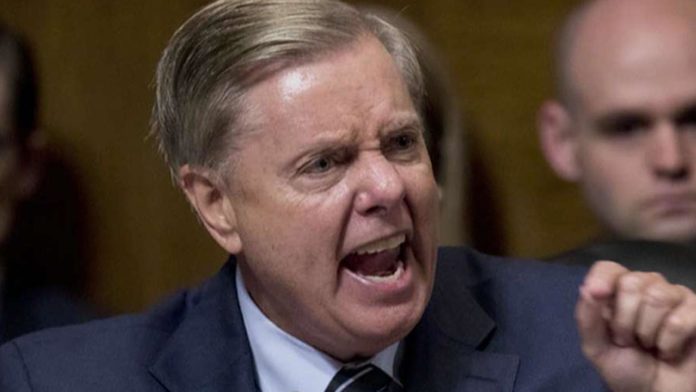 “The briefing was on the topic of the Trump administration’s Syria policy, and at one point a response from Shanahan prompted Graham to unleash a string of expletives and declare himself Shanahan’s ‘adversary,’ according to two officials in the briefing and three others familiar with the conversation.”

Other lawmakers were also rankled by Shanahan’s responses, suggesting that he may not be able to pass Senate confirmation if President Donald Trump decides to nominate him for the post, with one member of Congress who was at the hearing remarking:

“He lost my confidence.”

But it was the fireworks Graham unleashed that raised eyebrows:

“Shanahan’s talking-points approach to the briefing only frustrated the lawmakers, prompting Graham to unleash expletives in a sharp exchange with Shanahan, according to the officials.

“Tensions escalated after Graham pointedly asked Shanahan for his opinion on Trump’s decision to leave Syria, and the acting secretary refused to condemn it. Raising his voice, Graham finally told Shanahan he should consider him ‘an adversary,’ according to the officials.”

Another person familiar with the Graham-Shanahan exchange noted:

“It was heated, particularly on Graham’s side.”

Rep. John Garamendi, (D-CA), who serves on the House Armed Services Committee, said he doubts Shanahan has what it takes to be head of the Defense Department:

“He is probably very good at securing government contracts, but it’s debatable whether he knows about the military.”

Another problem for Shanahan, another person told NBC, is that he’s seen as little more than than a yes-man for Trump:

“Shanahan is just trying hard to do whatever Trump tells him. He’s going to do everything he can to appease the president.”

The dust-up between Graham and Shanahan came just days after two Pentagon officials were criticized for a lack of honesty regarding the stationing of U.S. troops on the border with Mexico.

After that hearing, Rep. Adam Smith, (D-WA) sent a letter to the Secretary of Defense in which he wrote:

“At best this was an error in judgement, at worst this was knowingly withholding information from this committee as it performs its oversight responsibility.”