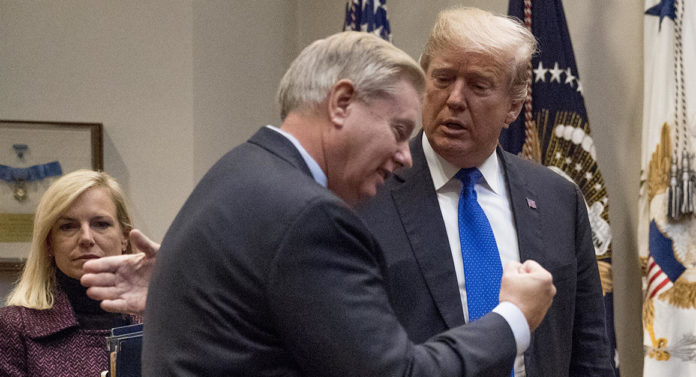 Nobody except for Mueller and Justice Department officials actually knows what the report says, and as Senate Judiciary Committee chairman, one would think Graham would want to focus on that document and the strong possibility that it will be damaging to Trump. Democrats are definitely focused on it, not to mention determined to make sure it is released to the public.

Instead, just 90 minutes after the report dropped, The Republican Party of Palm Beach announced that Graham would be the keynote speaker at a Lincoln Day event at Mar-a-Lago.

The Republican Party of Palm Beach is hosting a Lincoln dinner at Mar-a-Lago tonight. The keynote speaker is Sen. Lindsay Graham, who heads up one of the two committees who received the letter from Barr on Mueller wrapping up today. https://t.co/ZFwqgwzxaK

And Trump apparently literally attended the event to monitor what his toady would say.

“If Lindsey’s speaking, I want to come down here for two reasons,” Trump said during his own remarks. “Number 1: he’s a great speaker. And Number 2, I know if I’m here, he’s not going to say anything bad about me.”

In fact, NBC News producer Frank Thorp wondered what Trump had discussed with Graham prior to delivering the speech.

I wonder what Pres Trump will discuss with @LindseyGrahamSC when he’s the keynote speaker for the Lincoln Day Dinner at Mar-a-Lago tonight? pic.twitter.com/YoG95n2mFC

Graham certainly did not disappoint Trump, who watched from a table in the ballroom as Graham called for an investigation against Clinton. The crowd then broke into “lock her up” chants.

A “lock her up” chant broke out at Mar-a-Lago tonight during Sen. Graham’s speech as he called for an investigation into Clinton and the origins of the dossier. Trump watched on from a table in the ballroom.

So, it looks like Graham is already ignoring what the Mueller report might say in favor of launching a real witch hunt against Hillary Clinton, something Attorney General William Barr has even called for prior to being appointed by Trump.

Graham just proved that he is too biased to be trusted with details of the Mueller report. It could say Trump is guilty as sin and he wouldn’t care. He’s Trump’s top stooge and everybody wants to know what Trump has on him that caused him to turn on his friend the late-Senator John McCain and run interference for a man he didn’t even like just three years ago.