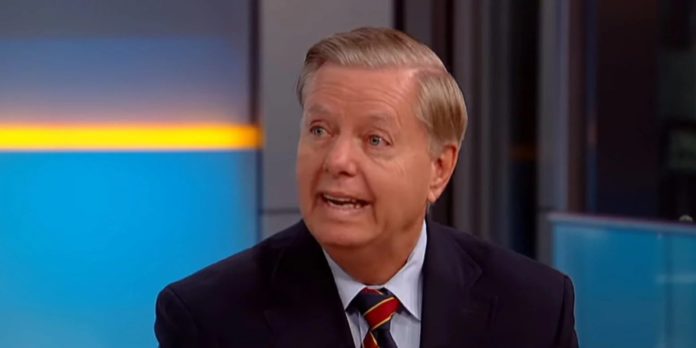 South Carolina Senator Lindsey Graham (R) is vowing to launch a Senate investigation into whether or not officials at the Department of Justice and FBI attempted to carry out a “bureaucratic coup” and force President Donald Trump from office.

“We will have a hearing about who’s telling the truth.

“It’s stunning to me that one of the chief law enforcement officers of the land ― the acting head of the FBI ― would go on national television and say, ’Oh, by the way, I remember a conversation with the deputy attorney general about trying to find if we could replace the president under the 25th Amendment.’ We’re a democracy. People enforce the law — can’t take it into their own hands.”

Sen. Lindsey Graham on alleged discussion of using 25th Amendment to remove President Trump: "We're a democracy. People enforce the law. They can't take it into their own hands. And was this an attempted bureaucratic coup? I don't know. I don't know who is telling the truth" pic.twitter.com/RNt9prdOOZ

Senator Graham, who serves as chairman of the Senate Judiciary Committee, added that McCabe’s comments sounded like a “coup” attempt:

“Was this an attempted bureaucratic coup? I don’t know. I don’t know who’s telling the truth. I know [former Deputy Attorney General Rod] Rosenstein vehemently denied it but we’re going to get to the bottom of it.”

Graham made similar comments back in September during an interview with Fox News, remarking:

“There’s a bureaucratic coup against President Trump being discovered here.”

Asked whether President Trump should fire Deputy AG Rod Rosenstein, @LindseyGrahamSC says: "He shouldn’t fire Rosenstein unless you believe Rosenstein’s lying, he said he did do the things alleged. But there’s a bureaucratic coup against President Trump being discovered here." pic.twitter.com/DDqCuJp2yv

However, while Graham and other allies of the president may engage in conspiracy theories, one question needs to be asked of them: If indeed the FBI and DOJ thought that Trump was unable to fulfill the duties of his office and might be acting on the behalf of a foreign adversary, didn’t they have a sworn duty to examine every possible remedy to the situation? The 25th Amendment, after all, can only be carried out by the vice president and members of the cabinet.

The larger issue remains whether or not Donald Trump is indeed compromised by other countries — i.e. Russia, Saudi Arabia, the UAE. If there’s proof that he has, then he must be removed from office to protect the national security of the United States.

ABOUT US
Lefties, Liberals, Progressives, Social Justice Warriors, Old Hippies, Concerned Millenials, Reformed Republicans and Democrats of Whatever Stripe – Welcome Home! We offer aggregated news – which means our writers credibly source and report on the news of the day. In all fairness, our team leans left and may editorialize from time to time but we are committed to giving you the facts. No tin-foil hat conspiracy theories here! Our Activism Resource Database is second to none and covers the spectrum from Animal Rights to World Peace (there were no categories that begin with Z). We make every effort to give you the most current information on ways you can make a difference. Whether you are an Armchair Activist or Full-Blown Social Justice Warrior we have something for you.
Contact us: [email protected]nitedstatesblues
FOLLOW US
© 2019 TheUnitedStatesBlues.com
This website uses cookies to ensure you get the best experience on our website. Learn more.