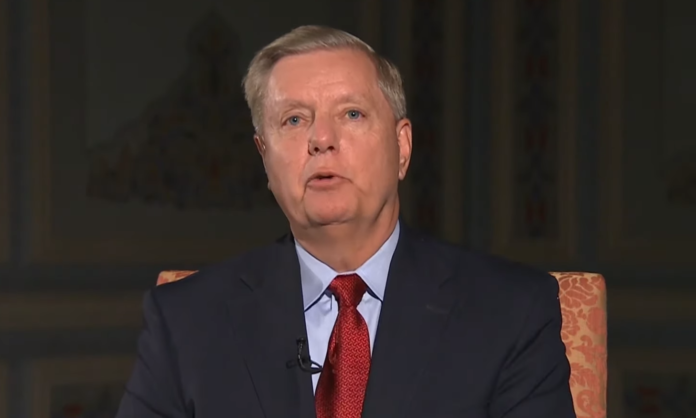 As he always does these days, Senator Lindsey Graham (R-SC) ardently jumped to the defense of President Donald Trump during an appearance on a Sunday news show, but he got more than he bargained for when the host called him out for dismissing Trump’s actions as a mere “joke.”

On “Face the Nation,” Graham was asked by host Margaret Brennan about Trump’s sarcastically telling Russian President Vladimir Putin not to “meddle in the (2020) election.” The senator replied:

“What concerns me is – are we gonna be ready for their meddling next time? I’ve seen this administration up their game. In 2018, we had a midterm election without a whole lot of interference because we’re- we’re upping our game, so to speak. So it was clearly a joke.”

That’s when Brennan used Graham’s previous remarks on the issue against him:

“But last time you were on this program you said Russia did not learn its lesson. So when you see this joking about something so serious regarding an upcoming election, doesn’t that counter everything–“

However, the CBS host persisted with her query:

“–in terms of a hard line the rest of the national security community is trying to send?”

Once again, Graham jumped to the defense of not only Trump, but Putin, too:

“Yeah, I’m not so sure rebuking Putin in- in front of a bunch of cameras does much good. What hurts him is when you hit him in the polit- pocketbook. His oligarch friends are having a hard time placing their money around the world. We put tremendous sanctions on the Russian economy, particularly in the energy area and it’s biting Russia. So actions mean more than anything in this part of the world.”

Are those the same sanctions that the Trump administration slow walked for months to avoid imposing? They certainly are. What about the sanctions that were lifted (thanks to Senate Majority Leader Mitch McConnell) on Russian oligarch Oleg Deripaska? Senator Graham didn’t address to those specific issues, probably because he has no real defense other than be agreeable to anything this president wants to do.

Interfering in American elections is not a “joke.” If Graham thinks it is, then he’s complicit in a criminal act, too, and he needs to pay a price for that at the ballot box in 2020.