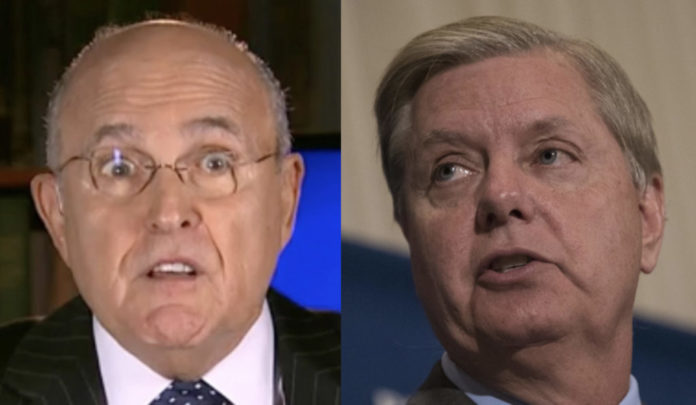 Senator Lindsey Graham (R-SC) announced Tuesday morning on Twitter that he will be inviting Rudy Giuliani to appear before the Senate Judiciary Committee — which Graham chairs — ostensiby to “inform the committee of his concerns” about former Vice President Joe Biden, who is widely seen as the strongest Democratic contender for the 2020 nomination and the biggest threat to President Donald Trump’s bid for a second term in office.

Have heard on numerous occasions disturbing allegations by @RudyGiuliani about corruption in Ukraine and the many improprieties surrounding the firing of former Prosecutor General Viktor Shokin.

Given the House of Representatives’ behavior, it is time for the Senate to inquire about corruption and other improprieties involving Ukraine.

Therefore I will offer to Mr. Giuliani the opportunity to come before the Senate Judiciary Committee to inform the committee of his concerns.

Keep in mind that Giuliani has yet to provide any evidence of the charges he has made against Biden or his son, Hunter. Instead, he has peddled discredited right-wing talking points that have been propagated by fevered internet sites such as Breitbart and InfoWars.

Social media quickly lit up with ridicule for Senator Graham, who is also facing a tough reelection battle in South Carolina:

The “allegations” are lies. Republicans, including Sen. Portman (R-OH), Sen. Kirk (R-IL) and Sen. Johnson (R-WI) signed a bipartisan letter calling on Ukraine to get rid of the prosecutor in because he was corrupt. Our European allies & the IMF agreed. Stop spreading this lie.

The corruption in the White House is far more disturbing. Find your spine and stand up for your country.

Lying Rudy has ZERO credibility. How can anybody call him as a serious witness? Joe Isuzu would be more reliable. May as well call the Easter Bunny and Baghdad Bob.#GuiltyGiuliani #LyingRudy

“Have heard allegations by @rudyGiuliani “ is your first mistake.

No date has been announced for Giuliani’s so-called testimony.