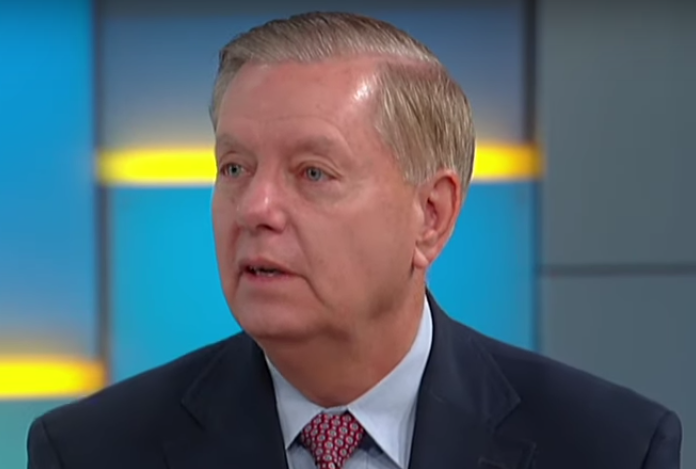 Senator Lindsey Graham (R-S.C.) gave a full-throated endorsement of President Donald Trump’s racist attack on four female Democratic lawmakers on Monday by launching a disgusting attack on his own.

On Sunday, Trump went on a racist tirade by telling Reps. Alexandria Ocasio-Cortez (D-N.Y.), Rashida Tlaib (D-Mich.), Ilhan Omar (D-Minn.) and Ayanna Pressley (D-Mass.) to go back to the countries where they came from even though all four are American citizens and three of them were born in the United States.

His tweet resulted in national outrage and condemnation from just about everyone except Republicans, who have been defending him.

On Monday during an interview on Fox & Friends, Graham also defended Trump by attacking the lawmakers.

“We all know that AOC and this crowd are a bunch of communists,” he said. “They hate Israel, they hate our own country, they’re calling the guards along our border concentration camp guards… they’re anti-Semitic, they’re anti-America.”

.@LindseyGrahamSC on Fox & Friends: “We all know that AOC and this crowd are a bunch of communists … they’re anti-Semitic. They’re anti-America.” pic.twitter.com/lsFqZi1Eu8

And Trump clearly loved what he heard because he directly quoted Graham on Twitter.

But while Trump loved what his lackey said, most Twitter users were appalled, and responded accordingly.

Lindsey Graham is a privileged white dude. Of course he thinks anybody challenging the existing power structure in this country is “anti-America”.

Why is it only Repubs go around telling other people what they believe? Omar & the other Squad members do, in fact, love their country, and they’ve said so. Who to believe? Them, or a Trump caddie who stood mute looking at detainees in cages and then praised the conditions there?

I don’t know what’s more offensive, his cheap, false rhetoric that’ll undoubtedly lead to threats if not violence against the young congresswomen he’s denigrating or that godawful faux folksy accent? Why does Lindsey work so hard for trump instead of the Americans he supposed to?

Republican Senator Lindsey Graham called 4 progressive congresswomen ‘a bunch of communists’ who ‘hate our own country’.

Mccarthyism making another run with these kinds of comments.
History repeats itself.https://t.co/sTUIyGLXck pic.twitter.com/sMtme1bebU

@LindseyGrahamSC you are a sniveling excuse for a man who once claimed to be a principled Republican…you have surrendered completely to @realDonaldTrump you cower before him and grovel like Martin Bormann did to Adolf Hitler. History will not be kind to you. #RacistPresident pic.twitter.com/Qhj8QGIxk2

Lindsey Graham, today, on Fox & Friends: “We all know that [@AOC] and this crowd are a bunch of communists, they hate Israel, they hate our own country.”

Why is loving Israel a prerequisite for being an American? And how would Graham define communism?

This is a sitting senator.

Lindsey Graham is a pathetic shell of a man and a disgrace to America. https://t.co/juE9v4qiNF

Calling Lindsey Graham a bottom feeder is an insult to Carp.

But there has been no flip-flopping. He said & did anything for donors & votes 20 years ago, and he does the same now. https://t.co/BaNFdU8k8N

This right here and Lindsey Graham’s statement that Trump retweeted this morning.

Who did Republicans swear their oath to? The US? Or Israel? And, really, foul language? Racist hatred? I guess he completely missed the Nazis and the Klan proudly in the front row of his rallies. https://t.co/VdVKExGafl

Four years ago, Lindsey Graham called out Trump’s racism and xenophobia. Now he’s gaslighting to protect it. His transformation from skeptic to stooge has been one of the most pitiful one-eighties in political history. https://t.co/zAnsKgzMza

As if agreeing with Trump’s racism wasn’t enough, here’s video of Graham kissing Trump’s a** by repeatedly calling him “the best golfer” during the same interview.

This man truly has no spine, no dignity and no honor. South Carolina should be ashamed of their senator.