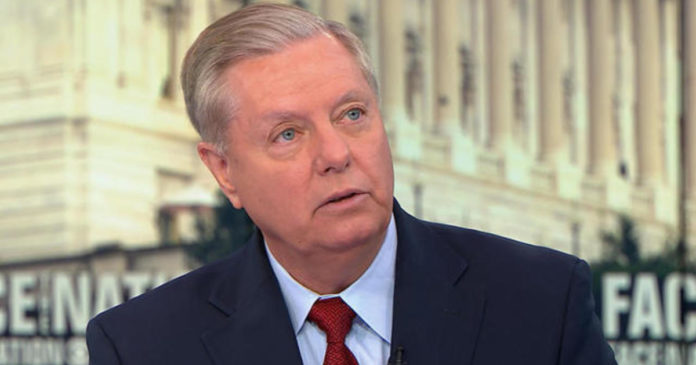 Senator Lindsey Graham (R-SC) said Sunday on “Face the Nation” that U.S. consumers are about to see dramatic increases in the price of products made in China, and then declared that Americans will merely have to “accept the pain” of President Donald Trump’s disastrous trade and tariff war.

“The Democrats for years have been claiming that China should be stood up to. Now Trump is, and we just got to accept the pain that comes with standing up to China. How do you get China to change without creating some pain on them and us? I don’t know.”

Seconds later, Graham added that “consumer prices on commodities are going to go up” as a result of the trade conflict, and that those increases will certainly be seen at stores such as Walmart, the largest brick-and-mortar retailer in the world.

TRADE WAR IMPACT: @LindseyGrahamSC tells @margbrennan “We’re now at that part in the trade war where you feel price increases at Walmart.” pic.twitter.com/Tsu70NWlEV

But Graham’s callous remarks about “accepting the pain” of the president’s foolish economic policies that appear to be plunging the country into a recession were not welcome on Twitter, where the senator was excoriated for what he said. Take a look:

Like he cares or shops at Walmart. If he cared about America instead of blood money he would start the movement to rid our country of that mad-man. “Nero fiddling while Rome burned.” Term-Limits!

How much pain is Lindsay Graham personally going to feel? Not much, his life will continue without any economic hardship, but his constituents on lower economic levels will feel pain. For this uncaring & insensitive statement, he should be voted out of office.

Wait- didn’t trump say Americans don’t pay the tariffs? Just another one of his 12000 lies ?

He should tell that to the farmers.

So I guess the takeaway from this is if you go to Walmart you’re going to feel pain, whether it’s from the price increase or a bullet in your back ??

Spoken like a man who has never shopped at Wal-Mart and who has other people who buy his food, clothing, and cleaning supplies for him.

And who started this trade war? Who’s responsibility are the price increases at WalMat? Mention to your people is in all @POTUS fault they are spending $1000 a year more than otherwise. Tell your people why they are paying for Trump’s ego trip.