The United States Blues
Home News Lindsey Graham: Trump would rather shut the government down again than give... 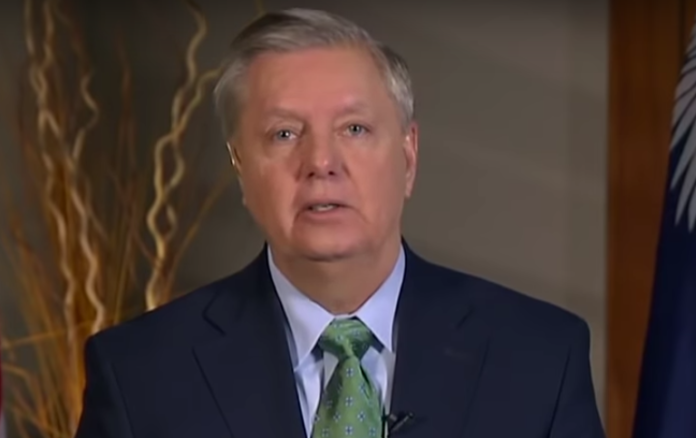 Senator Lindsey Graham (R-S.C.) suggested that President Donald Trump would rather cause another government shutdown than sign a bill that actually gives him money for a wall in exchange for limiting the scope of ICE (Immigration and Customs Enforcement) inside the United States.

Border security negotiations broke down over the weekend after Republicans refused to agree to cap the number of beds at ICE detention facilities used for detaining immigrants who are already in the country just for being undocumented.

That takes up space that should be used to detain violent criminals instead of people whose only offense is crossing the border illegally.

Democrats even offered Trump some funding for new border barriers in exchange for refocusing ICE, but to no avail. Trump has been lashing out at Democrats ever since and accused them of wanting violent criminals released even though that’s not the case at all.

On Sunday, Graham told Fox News that Trump won’t sign such a bill, suggesting that Trump is willing the shut the government down rather than work with Democrats in good faith. He even attacked Rep. Alexandria Ocasio-Cortez (D-N.Y.), and suggested she’s the reason why Democrats are trying to limit ICE.

“He can’t sign such a bill,” Graham said. “And I don’t know if that’s 100 percent accurate, but I think that’s the impasse we have. They’re willing to give the president a little more money for the wall, but in return they want to limit the number of bed spaces allowed to house violent criminals. This goes back to AOC’s belief that ICE should be abolished. So, the bottom line is how can you get money for a wall and at the same time limit spaces for violent offenders and say you’ve solved the immigration problem? You’re actually incentivizing more illegal immigration by reducing the bed space, and it undercuts any money you’d get for a wall. He can’t sign that bill. If that’s the friction point, then we’ll have a continuing resolution and we’ll just keep talking.”

The problem is that Trump has previously refused to sign continuing resolutions before, which is why we had a government shutdown for 35 days before he caved and agreed to negotiate with Democrats. But now Trump is refusing to negotiate. He wants a wall and he wants Democrats to get nothing in return. That’s not how negotiations work and it’s why there will be another government shutdown this month if he refuses to take the offer on the table. Democrats were willing to bend by giving him wall funding. Trump and Senate Republicans are clearly the ones preventing a deal from being struck.

Also, did Graham just admit that a wall won’t stop illegal immigration? Because he literally just implied that limiting bed space at ICE facilities will increase it even if Trump’s wall is funded. Talk about shooting oneself in the foot.

And if Trump really believes there’s a national emergency at the border he should be willing to focus ICE on the border instead of letting them target innocent immigrants who are already here. By limiting bed space, ICE would be forced to focus on real criminals. If Trump truly is concerned about stopping crime, he should support this shift in focus or just come out and admit that all he really wants to do is persecute brown people to pander to his racist base.