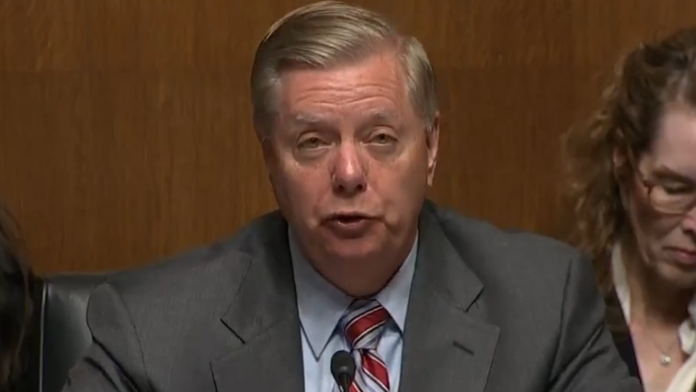 After eagerly supporting and defending President Donald Trump for what seems like forever, a moment of accidental honesty managed to escape from the mouth of Senator Lindsey Graham (R-SC) Tuesday during a hearing in the Senate Judiciary Committee he chairs.

The debate was over the influx of migrants from Central America and the increase in immigrants seeking asylum in the United States. Graham said that Trump’s long-promised wall on the U.S.-Mexico border won’t solve the problem:

“A wall will not fix this problem.

Graham is partially right. A wall isn’t going to do a bit of good. The rest of his statement is simply showboating to make sure he stays in Trump’s good graces. The president wants to block all immigration unless the immigrants come from predominantly white nations and have lots of money they want to spend or invest in the United States. Everyone else, Trump has made clear, can just kick rocks and stay where they are.

But none of these facts have kept Trump from trying to keep his campaign pledge to build a wall and have Mexico pay for it. Now he wants American taxpayers to foot the bill and even declared a national emergency so he can pretend that he needs to steal billions of dollars from our military to fund his vanity project.

And the president has also sought to malign immigrants as sub-human animals who cannot be allowed to see asylum. As ShareBlue Media notes:

Trump falsely claimed the U.S. is “full” and is demanding that Mexico stop Central American migrants before they make it to the United States. Trump has also grossly maligned those seeking asylum, claiming they’re running a “scam” and lying about fleeing persecution and gang violence. He wants to make it even harder for them to have their claims granted.

While it’s refreshing to see a member of the GOP finally speak the truth (if only for a fleeting moment), the real problem here has nothing to do with walls, immigration, or borders. It has everything to do with one man’s ego.