The United States Blues
Home Politics Congress Liz Cheney gets destroyed after arguing against a ban on killing endangered... 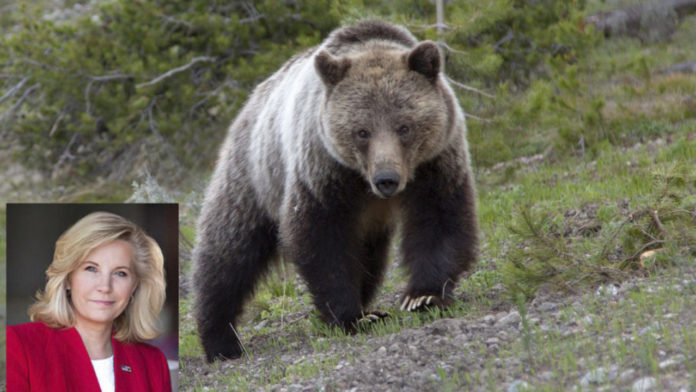 Rep. Liz Cheney (R-MT) is getting major pushback from Native American tribes after she argued that the grizzly bear should be removed from endangered species list because such a protection “violates the Western way of life.”

The grizzly was place back on the endangered species list Tuesday, almost a year after a federal judge ruled that the Trump administration had exceeded its authority when it attempted to arbitrarily remove the bear from the protected list, according to Common Dreams:

The U.S. Fish and Wildlife Service (USFWS) sought to allow trophy hunters to shoot the Yellowstone bears, whose population in the park is just over 700, and to open up the public lands for fossil fuel industries. Native tribes including the Crow and Northern Cheyenne tribes joined with the Humane Society and Wildearth Guardians to fight the administration.

Cheney has also said that “radical” groups were behind the move to restrict hunting of the grizzlies and had pushed for a rule she called “needless and harmful to the ecosystem.”

The Rocky Mountain Tribal Leaders Council (RMTLC), which testified at a congressional hearing in May on the Tribal Heritage and Grizzly Bear Protection Act, did not take kindly to Rep. Cheney’s remarks, with Tom Rodgers, senior adviser to the RMTLC commenting:

“So, in striving to protect our culture, our religious and spiritual freedoms, our sovereignty, and our treaty rights—all of which are encapsulated in the grizzly issue—we are ‘destroying’ Cheney’s idea of the ‘Western way of life’?”

“I would remind the congresswoman that at the time of the Lewis and Clark Expedition an estimated 100,000 grizzly bears roamed from the Missouri River to the Pacific Coast. That was all Indian Country. Now there are fewer than 2,000 grizzly bears and our people live in Third World conditions on meager reservations in the poorest counties in the U.S. Does she really want to talk about ‘destroying’ a ‘way of life’?”

Others took to social media and weighed in on what Cheney had said:

Liz Cheney is very upset that the people whose land was taken have interfered with the people who took the land. https://t.co/3fdDBo2MXA

Can’t decide if @Liz_Cheney or her venal father is the more comically villainous. https://t.co/Y3GMymNeR0

Much like her father, Liz Cheney doesn’t give a damn about anyone but herself and her own selfish agenda. She’s the perfect symbol of the Republican Party in the Age of Trump.