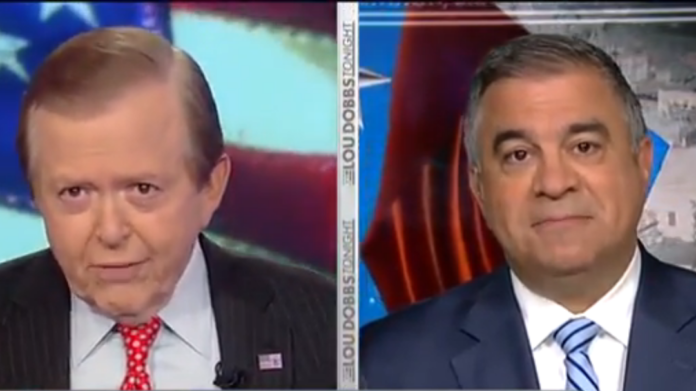 As it becomes clearer with each day that the Democrats did indeed have a “blue wave” of success in the 2018 midterms, picking up nearly 40 seats in the House and possibly holding serve in the Senate, those who support the Republican Party are starting to make excuses for why Democrats fared so well.

The latest is Fox Business host Lou Dobbs, who claimed Thursday evening — without a shred of evidence — that “illegal immigrants” were what tipped the election in favor of the Democrats.

“We’re watching millions of illegal immigrants cross our borders and many of them voting in the past election…a couple of weeks ago, and having an immense impact. If there, as Yale and M.I.T. say, 20 to 30 million illegal immigrants already in this country, you know what that means for the districts of the U.S. Congress and the influence that they’re giving to, for example, the state of California, Illinois, New York.”

“Are we just sitting here, helpless against anyone who wants to cross that border, and to have their way with the American way?”

Sounds like Lou needs a fact check. The Yale/M.I.T. study did indeed say there could be as many as 30 million undocumented immigrants in the United States, but it said nothing about those people voting or even attempting to vote.

In 2017, the Brennan Center for Justice also did research showing that voting by non-citizens was “vanishingly rare” based on years of data.

Of course, we shouldn’t be surprised that Lou Dobbs would traffic in lies. He’s been doing it for years now. While he was still employed at CNN, according to The Washington Post, Dobbs alleged:

“An ‘army of invaders’ from Mexico was crossing the border illegally as part of a plan to ‘take over’ the southwestern United States. He has misleadingly said undocumented immigrants comprise one-third of the federal prison population. And perhaps most notoriously, Dobbs said in 2005 that an ‘invasion of illegal aliens is threatening the health of many Americans,’ before turning to a report wrongly finding that, despite there being only 900 cases of leprosy in the last 40 years, there had been ‘7,000 in the past three years.'”

Sounds like Dobbs is auditioning to be Trump’s next Homeland Security chief, doesn’t it?

Lou Dobbs: “We are watching, you know, millions of illegal immigrants cross our borders, and many of them voting in the past election that’s what, just a couple weeks ago, and having immense impact” pic.twitter.com/p0zt6DpR7M