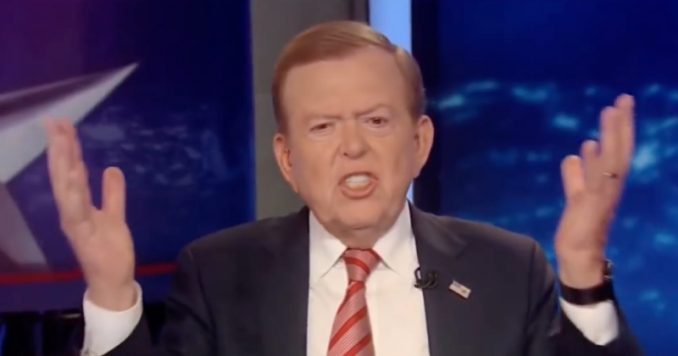 Fox Business host Lou Dobbs defended an ICE guard who hit protesters with his truck earlier this week, and claimed that he had the right to do so.

In a disturbing act of violence against protesters on Thursday night at a Rhode Island detention facility, an ICE guard plowed his vehicle into a line of people blocking the entrance, actually hitting one of the protesters. Video of the incident has gone viral, but the guard went even further by calling for his buddies, who proceeded to pepper spray the peaceful protesters.

This guard assaulted human beings with a truck, making him no better than a terrorist who tries to do the same. Do you know who else hit protesters with a vehicle? A neo-Nazi in Charlottesville back in 2017, just two years ago. In that instance, a protester named Heather Heyer was killed.

Nobody died in Rhode Island, but this guard still could have killed someone, yet Dobbs defended his actions.

“Protesters in Rhode Island harassing a federal detention worker last night,” Dobbs began “These demonstrators blocking an entrance to a facility holding illegal immigrants when the driver tried to pull into the parking lot, the protesters surrounded him, yelling, banging on the hood of the truck, blocking his entrance.”

Dobbs had the gall to accuse the protesters of assault even though the guard is the one who tried hitting them with his truck. He even edited part of the video to make the protesters look like the villains.

While speaking with ICE Director Tom Homan, who had no problem insulting the protesters by suggesting they don’t have jobs, Dobbs doubled down and claimed ICE guards should have the right to plow into protesters with their vehicles.

“I know that it must just gladden your heart to see a bunch of demonstrators at an Immigration Customs Enforcement facility blocking the path of a guard and then complaining about the fact that he sought to do what is within his rights, which is to proceed to park his vehicle and go to work,” he said.

This is about as despicable as it gets. A Fox host is actually defending what is considered a crime, even an act of terror by a government employee. This guard should no longer have a job but in Trump’s America, he’s being glorified for what he did, and sets a terrible precedent that could result in violence against protesters in the future.