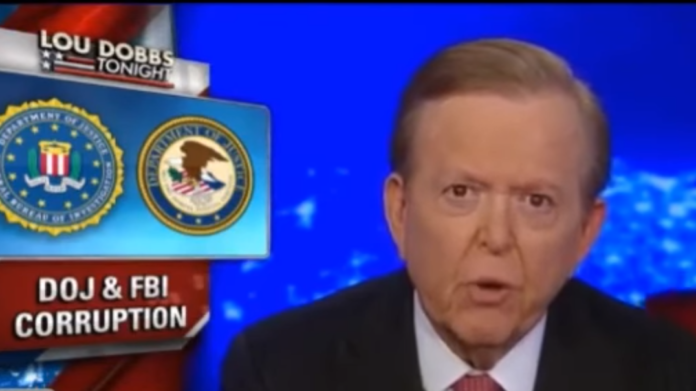 Bless their hearts, the gang over at Fox News and Fox Business can feel it all slipping away from them.

Just hours after news broke that the FBI had raided the office and residences of President Donald Trump’s personal attorney, Michael Cohen, in New York City, the right-wing network shifted into overdrive in an attempt to urge the president to fire Special Counsel Robert Mueller before he could find more evidence of Trump’s wrongdoing.

Trump himself was asked about whether or not he was planning to fire Mueller, and he responded:

“We’ll see what happens. Many people have said, ‘you should fire him.’ Again, they found nothing and in finding nothing that’s a big statement.”

But no one seemed to be taking the news out of New York any harder than Fox Business host Lou Dobbs, who has been slobbering over Trump since he first decided to run for the White House.

On his show Monday evening, Dobbs was speaking with Fox legal analyst Gregg Jarrett. A visibly angry Dobbs declared what he would do regarding Mueller:

“This is now a man that has to be brought under control, it would seem to me. Frankly, I can’t imagine ― because each of us has to come to terms with our own heart and conscience ― I would fire the SOB in three seconds if it were me.”

While he was at it, Dobbs also fired off one salvo after another aimed at the Department of Justice and FBI:

“If there’s anyone in this country who thinks that this Department of Justice leadership is competent, is impartial and fair and committed to justice instead of a partisan result in the interests of the deep state and not the United States of America, then they haven’t been paying attention to anything ― anything ― that’s been going on in the nation’s capital.”

The irony of it all is almost too much to take. Keep in mind these are the same people who chanted “lock her up!” and lauded former FBI Director James Comey when he reopened the Clinton email investigation just days before the 2016 election. But now that their political savior is the one under the microscope, they want to try and denigrate federal law enforcement and the American legal system.

If Dobbs and his colleagues at Fox want to see the real SOB in this story, they don’t have to look any further than the Oval Office.