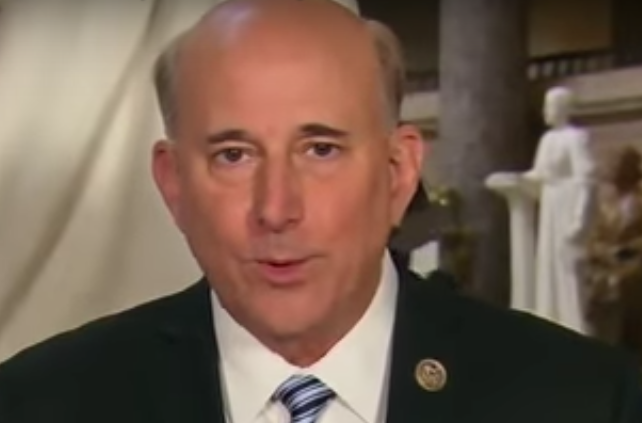 Rep. Louie Gohmert (R-Texas) launched an attack on liberal donor George Soros so slanderous that even Fox Business condemned him for it, but Gohmert doubled down on Friday.

During an appearance on Fox Business on Thursday, Gohmert smeared Soros while talking about Google developing a censored version of their search engine for China. The Texas Republican congressman accused Soros of being anti-Semitic and anti-Israel and claimed that he collaborated with the Nazis during World War II.

“Google is born in a free country, and then they go over and oppress others, help oppress another country,” Gohmert said. “Uh, George Soros is supposed to be Jewish, but you wouldn’t know it from the damage he’s inflicted on Israel, and the fact that he turned on fellow Jews and helped take the property that they owned. This same kind of thing — Google coming from a free country and helping oppress.”

Outrage ensued over Gohmert’s smear, including from the Anti-Defamation League.

“In the last hour, one of our guests, Congressman Louie Gohmert, for some reason went out of his way to bring up George Soros, and made unsubstantiated and false allegations against him,” Varney said. “I want to make clear those views are not shared by me, this program or anyone at Fox Business.”

But Gohmert went on to claim that his attack was “pro-Jewish” and doubled down the next day on Twitter.

“Soros himself admitted in a 60 Minutes interview with Steve Kroft on December 20, 1998 that he had no regrets whatsoever about assisting the Nazis in confiscating property from the Jewish people during the Holocaust. That is a fact …” FULL STATEMENT: https://t.co/Z9ZDcLl4s0

The reason why we know Gohmert’s claims are false is that Snopes has repeatedly debunked them. Soros was 9-years-old when World War II began and was only 14 when it ended. He was just a child, but conservatives have been attacking him for years for trying to survive instead of standing up to the Nazis. Again, Soros was a child. He could not have been expected to challenge them. He would have been murdered.

Conservatives like Gohmert also falsely claim that Soros, who was recently a target for assassination by a right-wing bomber, admitted to helping Nazis take property from the Jews using deceptively edited video of an interview. But the unedited interview makes it clear that while the person protecting him helped the Nazis take property, he was merely an observer who was powerless to stop what was going on. He’s a witness, not a perpetrator.

Here’s the video of Snopes debunking smears against Soros via YouTube below:

It should also be pointed out that criticizing Israel does not make someone anti-Israel or anti-Semitic. It’s called free speech. It’s how we use that free speech that matters. If anyone is anti-Semitic here, it’s Gohmert for falsely accusing Soros, a Jewish person, of being a Nazi collaborator when the facts are clear that he was nothing of the sort. This kind of attack is a favorite tactic of neo-Nazis who fear the power of the liberal billionaire, and Gohmert should be ashamed of himself for repeating it.