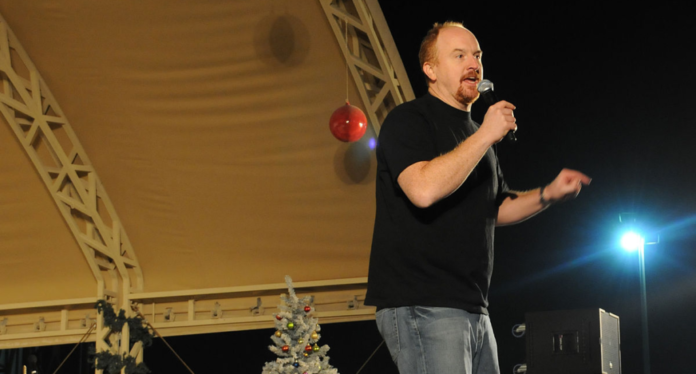 It’s been five weeks since the storm of sexual allegations against film producer Harvey Weinstein shook Hollywood and the country. Confronting abuse from men in influential positions like Weinstein has almost become a movement. Stories are coming out daily about men in powerful positions engaging in sexual abuse. Allegations have been directed at actor Kevin Spacey, former President George H.W. Bush, Alabama Senate hopeful, Roy Moore, and comedian Louis C.K. and of course, we have the ongoing story of Trump, who made it to the White House despite numerous accusations lodged against him. Today, Louis C.K. came forward with a statement that sets him apart from these other men. Maybe they should take note.

Though it must be pointed out that these are allegations and not yet proven in court, the responses from Kevin Spacey and Moore have only done more harm to all involved.

Spacey seemed to make the initial report of an alleged assault of a 14-year old boy a chance to shift the topic to a coming out story for himself, drawing instant and justified criticism from LGBTQ leaders.

No no no no no! You do not get to “choose” to hide under the rainbow! Kick rocks! https://t.co/xJDGAxDjxz

Twice elected and twice removed from office from the Alabama Supreme Court, Roy Moore was just gearing up to take a Senate seat when the allegations of his alleged attempt at sexual contact with a 14-year-old girl in 1979 came out. Now The Washington Post reveals the Alabama Senator could be Democrat Doug Jone if the voters hold Moore accountable.

Today, Moore is calling the allegations “fake news,” and blaming it on what he calls the “Obama-Clinton Machine’s liberal media lapdogs” waging what he terms a “spiritual battle.”

The Obama-Clinton Machine’s liberal media lapdogs just launched the most vicious and nasty round of attacks against me I’ve EVER faced!

We are are in the midst of a spiritual battle with those who want to silence our message. (1/4) #ALSen

Taking a cue from Trump, Moore’s campaign is choosing to totally discredit the accusations, saying they are “the very definition of fake news and intentional defamation.”

Former president George H.W. Bush confronted accusations himself, from two women who claim he groped them and made a crude joke about it. While his spokesperson did acknowledge the stories of the victims, they said it was “intended to be a good-natured” joke and that Bush “apologizes most sincerely.” His victims didn’t see the humor in the assault.

Rather than deny the allegations or call the stories “fake news,” Louis C.K. gave this statement:

“These stories are true. At the time, I said to myself that what I did was okay because I never showed a woman my d— without asking first, which is also true. But what I learned later in life, too late, is that when you have power over another person, asking them to look at your d— isn’t a question. It’s a predicament for them. The power I had over these women is that they admired me. And I wielded that power irresponsibly.”

Louis expressed remorse, regret, and empathy for the victims and those he worked with.

“I have been remorseful of my actions. And I’ve tried to learn from them. And run from them. Now I’m aware of the extent of the impact of my actions. I learned yesterday the extent to which I left these women who admired me feeling badly about themselves and cautious around other men who would never have put them in that position.”

He also noted the impact goes on to affect everyone in his life.

“I’ve brought pain to my family, my friends, my children and their mother.
I have spent my long and lucky career talking and saying anything I want. I will now step back and take a long time to listen.”

This response from the comedian doesn’t absolve him of wrongdoing, certainly. The repercussions for his victims and for himself will continue, but he owned up to his wrongdoing with sincere culpability. Most importantly, he validated his victims and the pain they continue to feel and that point can’t be overstated.

This is what sets him in total contrast with the other powerful men who used that advantage to damage the lives of their victims. For Trump and Roy Moore, acknowledging the pain of the accusers would mean the stories aren’t “fake news,” and that would strip them of their advantage of power.

Moore and Trump only want their power to increase. Trump now occupies the White House and Roy Moore refuses to give up his bid for the Senate. If the accusations are true, that also proves that they are two men perfectly willing to destroy innocent lives to remain in power.

In his statement, Louis C.K. has relinquished his power, hopefully giving some of it back to those he has wronged. Meanwhile, the impact of the Weinstein story continues to bring forward victims of men in positions of power.